Mines are built to last as long as they are in use. Many cavers dislike mines, because they’re inherently unsafe. Many caves we visit have been abandoned nearly a hundred years ago, and in the time that passed the timbers and the floors rot, and the tunnels and stopes start to crumble. It has happened that we were in a mine, and saw the scar of a tunnel high up a wall. One of us mentioned he had walked in that tunnel the previous time he had been there...

We would go deep down into an iron mine. It would involve a lot of rope work. So I set my alarm at a not-very-Sundayish time, and biked with full bags to Dave. When I got there, only Dave and the cats stirred in that household. Dave must have had a wave of psychic powers, for he offered me a mug of coffee before we would set off. When we were on the way we got a warning message from Lionel: icy roads! We soon noticed that ourselves too. So we teamed up with him and Richard, some 2 miles from the mine, and pondered about how to get there. All together in Dave’s car we tried the road, and it was an ice track. We then tried the most unlikely routes, until we got another message, this time from Mike. After the slippery start the road was fine; he’d tried it! So with a half hour delay we reached the designated parking place.

We heaved all bolting kit and 130m of rope onto our shoulders and walked to the adit. About 100 m in we got kitted up (it took two people to squeeze Dave into his harness), whereupon Dave started rigging. He started on more or less solid rock, and moved onto a wooden floor, which contained the trapdoor through which we would go down. He was rigging when we suddenly heard a shout and a massive thundering sound. It made my heart jump! I knew Dave was tied to a rope, but it still didn’t sound good. It turned out he was fine; he had just gone through the floor with one foot. And all sorts of material had gone down into the depths. He carefully went down the hole anyway, but every time he touched the sides more rock came loose and thundered down. Lionel had a look too, and he didn’t really like what he saw, or what he heard crash into a lower level with a mighty thud. We decided this was perhaps a bit too tricky, even for our standards. As a matter of fact, the whole mine was decidedly dodgy, with collapses everywhere. So we just packed up our kit and got out again! I felt very sensible. 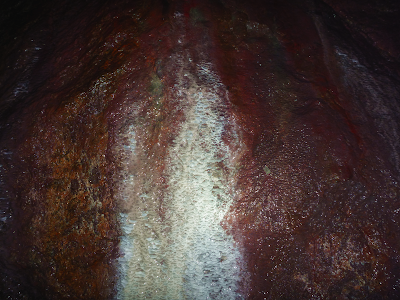 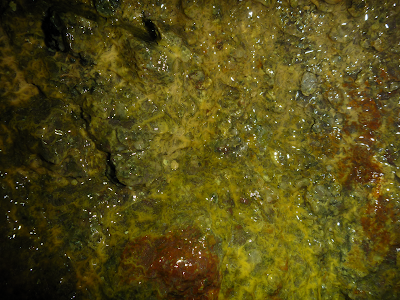 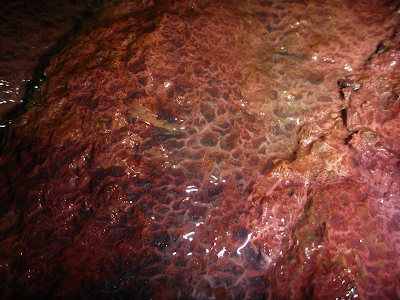 Splendid staining on the walls!

We now had lots of time, so we decided to go to a nearby pub and have lunch together. Who would have thought! A Sunday afternoon, and the cavers are sitting in comfy chairs in a warm pub having a meal. A Sunday with surprises, this! 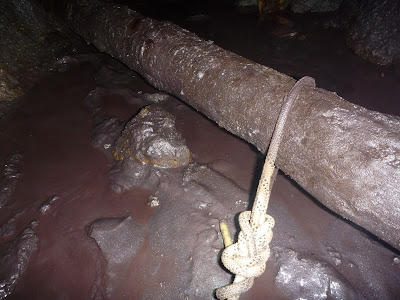 Evidently an iron mine! Most things turn purple in there. And don't worry, the rope was fixed to bolts; this was just some extra security. 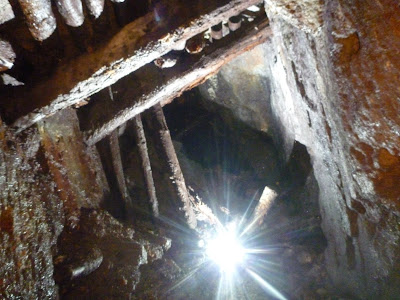 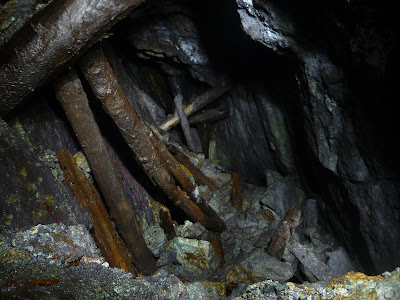 A lot of this adit had already collapsed 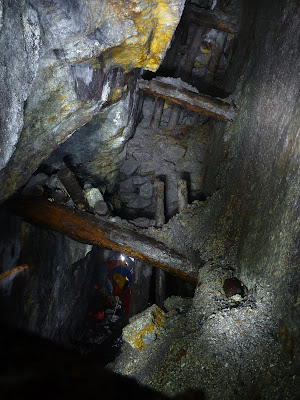 From here you can see all the false floors above our heads. These timbers weren't what they had been in better days. See in the distance some coloured figures: Richard and Mike keeping an eye on Dave and Lionel 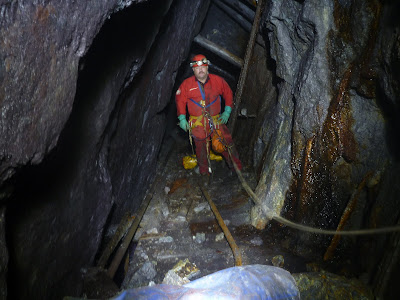 Dave on the wooden floor. Behind him is the hole we had thought to disappear into. 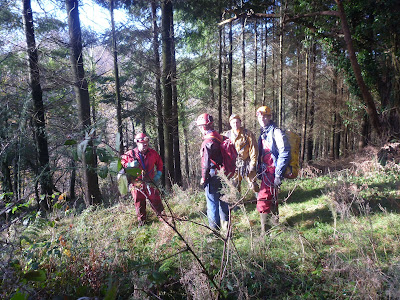 And then we were standing outside in the bright sunlight!
Posted by Margot at 14:26