At AGU there lurks a bigshot in every corner. And even the biggest of the big are around. So big that every educated person in the world should know who they are. I had the pleasure of attending presentations by a number of these. And I’ll try to share that.

I’ll start with God. Or at least, that’s how he sometimes is described. His fame may be illustrated by the following anecdote: one of my Amsterdam colleagues walked out of his office, slightly dazed, and told the first person he bumped into he had just had God himself on the phone. The response was: really, did you just have Wally Broecker on the line? Broecker more or less discovered the conveyor belt, which earned him his status. And since that discovery he hasn’t been idle. And now he’s written a book about it. Strange that science goes so fast that you can still meet the person who discovered one of these certainties in life... like talking to Alfred Wegener. Or Charles Darwin. And by now he’s not the youngest anymore; we don’t know how much longer we can enjoy his presentations. 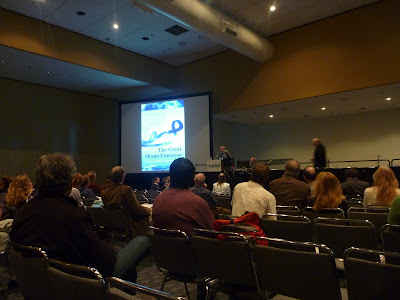