The email that went out warned against too high expectations: we might not make it underground this trip. Finbar was after some mine the club had not previously explored, and we first had to find it, evaluate how it should be rigged, and then possibly go down. But after the first two activities there may not be more time for the third.

Quite abruptly Dave turned off the main road, and immediately some familiar shapes could be made out. Rick, Finbar, Lionel; quite a dream team, and except for Rick I hadn’t seen them for quite a while. When we parked the cars we wondered if we should get kitted, or perhaps first look for the shaft. And strangely enough it was me who suggested doing the recce in civilian clothes. And I was in a skirt. And Finbar spoke of nettles and brambles.

We set out over a comfortable path. Easy, caving in a skirt! We admired the relics of the engine house, wheel pit, and some more of such features. And then spread out, looking for the shaft. And that’s where it really became thorny. 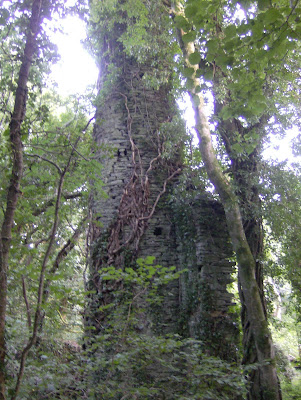 The chimney; pic by Dave
It paid off, though! Wrestling through a particularly nasty bit I came up on a high, where my eye was caught by a dark shape. Aha! The shaft! Finbar was nearby , and quickly answered my beckoning. Then the job was flagging the other men in... that involved some more bramble-sliding. But soon we were gathered. And by that time the blood was trickling down my legs.

We wanted to see how deep it was, and if we could see some levels leading off from it, but it’s not advisable to just stand on the edge and lean over, so we fidgeted a bit with ropes. And it turned out to be a very pretty one! We all agreed it was a deep shaft, but couldn’t really see what the situation was regarding levels. And in the meantime Lionel had turned his attention to an ancient car wreck wrapped around a tree just beside the shaft. He went so far as to exactly  identify the door handles. 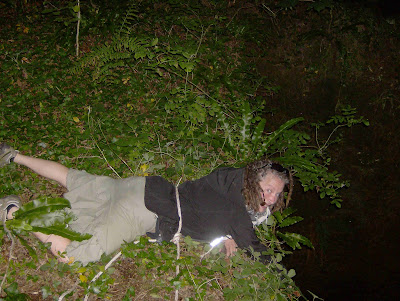 Me trying to see the bottom of the shaft. Or in other words: me lying flat on my belly in a dark, thorny wood, surrounded by four men who have tied me to a tree. All in a day's work! Pic by Dave.
We decided it would be too late to rig it. We packed up, failed to agree on a date for the actual trip, and made our way back to the cars (needing a find-Finbars-glasses-back-break on the way), and then to the pub. There we had a good time, but still failed to agree on a follow-up date. I do hope it will be a day I am available! This night was one heck of a teaser...
Posted by Margot at 23:17