Good things and those who wait

This story starts in 1997. I was strolling around on the terrain of the Lowlands festival. It wasn’t as overpopulated as it would later become, and one could still stroll. There wasn’t any band playing I specifically wanted to see, so I just tried my luck on bands I had never heard of, vaguely guided by the descriptions in the festival guide. And that way I ended up in an almost empty festival tent, where nobody less than 16 Horsepower was playing. They had just released their first full-flown album, Sackcloth & Ashes, the year before. I wandered in, got completely captivated by their music, and have not been released to this day.
There is something in that music that grabs you by the soul and does not let go. It’s very, very serious music. If you are tired of the speed and frivolity of modern life; if you want to escape from chavs and binge-drinking and reality shows and tabloids and nightlife and consumerism and fashion hypes and all the glittery surfaces, listen to 16 Horsepower. They want to bring you to God. They never managed with me, but they do bring me to responsibility, resignation, reflection, veneration.

A few years went by. I bought every record they released, and went to every concert I could go to. And there were more like me. They have a strong fan-base in the Netherlands; maybe because as one of the few Calvinistic countries, we have a thing going with chastising the soul. So it is not too surprising that in 2000, a documentary about them was released on Dutch television. I heard about it too late… Allard, though, who is also a fan, had seen it, and told me about it. And the images that created in my mind stayed with me.

More years went by. I still bought record they released, and went to every concert I could go to. When in 2002 David Eugene Edwards, as far as I can tell the backbone of 16 Horsepower creates his other band “Woven Hand” I just go and buy their records too, and visit their gigs. That even included a concert in Tromsø. I could never have guessed that, in that tent in 1997…

In the meantime I could not forget that documentary. I have tried a few times to find; on DVD, on Youtube; wherever, but always in vain.

Things have changed since 1997. I don’t go to festivals anymore. I do go online a lot more than in 1997. And as you do, I one day expressed my admiration for David Eugene Edwards by “liking” Woven Hand on Facebook. For the non-Facebookers: if you like some entity on FB you receive any message they send out. And then a few days ago, Woven Hand announced that this Dutch documentary had found its way to Youtube. Ten years later! So now I’ve seen it for myself. And it was all I expected it to be. It’s quite in the spirit of the band to wait ten years for your morose gratification… 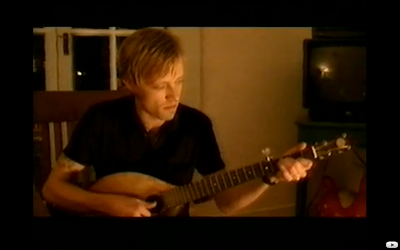 A still from the documentary. Copyright: VPRO
Part1 Part2 Part3 Part4 Part5
Posted by Margot at 19:00

And you keep amazing me with your pictures... Eyecandy!

My pleasure! Isn't the bloke one amazing musician. And thanks!