I sometimes get compliments for the steady stream of postings that appear on my blog. Well, producing words is one of my stronger points. Written, but perhaps even more so spoken. I don't tend to shut up very often. And late April I had to. No voice! At all! For what seemed like an eternity.
Yesterday I had a slightly swollen throat, and my voice sounded a bit odd... so I got worried. Would it happen again? And yes. Today I woke up with hardly any voice, and around lunch it was completely gone. Not again! I want to express myself! 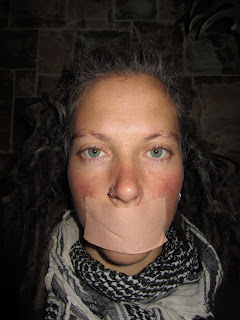 As I feared another two weeks of being more or less ill, and one week of not talking, I decided to see my physician. Maybe there was something that could be done. Emily was so kind as to phone the medical centre for me. Fortunately, I could come immediately. The GP needed about ten seconds to diagnose laryngitis. I had only heard of that a few hours earlier; Maria suspected that would be my problem, instead of tonsillitis, as the latter does not normally affect the voice so much. So she was right. The remedy seems to be resting the voice, and consuming paracetamol, lemon, honey and cider vinegar. And the previous time, the size and colours of my tonsils were such that in hindsight I conclude I then had tonsillitis and laryngitis at the same time, and this time I don't, so I hope it will get better much quicker! I am doing my best, not speaking (how I love internet again), and devouring industrial amounts of the substances mentioned above. We'll see how it goes!
Posted by Margot at 20:52