Things not found and lost. And found!

“Tomorrow I’ll go have a walk around that mine I went to a few weeks ago, when you were in Bunker’s, to see if I can find another adit”. Dave said this on the way to Cornwall, where we would meet up with the Cornish Madmen. It’s not much of a cliffhanger is it? I thought a walk in the fresh air on a Friday night, with possibilities for seeing mine remnants, was too tempting to resist. I went along!

What does one bring on such an above-ground little excursion? I made sure I wore sturdier boots then the ones I wore on the Tuesday trip, and long trousers, this time. And I figured we might find the adit. One needs to be able to check if it is indeed the one, right? So I packed my helmet too. And of course my cameras were with me.

Dave parked on some path, and we set off. And what followed was yet another open air lecture in industrial archaeology. Yay! 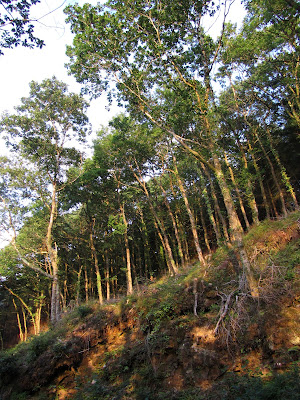 Evening sun on the Cornish woods. And spot the adit!
We didn’t find the adit we were looking for, but we did pass two others. And of course I had a look. The first one was very beautiful, and I knew again why I became a caver. The pull is strong! Want to go in! Want to go further! But Dave was waiting for me. So I did not go deep, but I was quite thrilled.

The second one was wet, and I was in civilian shoes. But it wasn’t wide, and I quickly figured you could treat it as a traverse! Just walk on the walls, and not touch the floor. Yay! I went all the way to the crossing, and then back. Lovely! Some underground treats on the Friday evening. 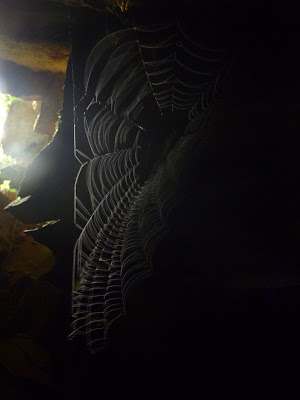 There were decorative spiderwebs at the adit entrance
So we did not find what we came for, but we did find a dreamy forest, more leats and calciners and wheel pits and whatnots than you can shake a stick at, and fish jumping in the river, a fox being startled by us... so an evening well spent! But it was far from over. 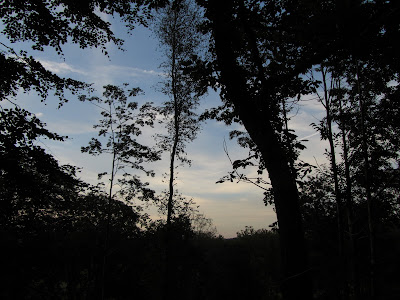 I was going to have a coffee with Emily the day after, but she had phoned that she had to work. And I wanted my hot beverage with that lady, so I asked Dave to drop me off at her place on the way back. And the hour inspired me to have a tea instead, but I got my hot beverage! That was a cozy evening. And for me it was bedtime by the time I left. And walking away I suddenly realised a loss... there should have been a bulge in my trousers! And there was none! That could only mean one thing. My waterproof camera was missing!

I phoned Dave, and I phoned Emily; I figured it would have slipped out of my pocket either in the former’s car or on the latter’s couch. But no! And now the worrying started. I need that thing for fieldwork! I already saw myself having to buy another one the next day. Which would be quite a Margot thing to have to do, but that doesn’t mean I would look forward to that.

Dave suggested we should have a look back where the car had been parked. We knew I had it just before getting in; it could not have been lost in the woods. So I found a good spot for him to pick me up again, and waited. My wait was made fairly unpleasant by an alcoholic who had chosen this very place to wait for nothing specific, but soon enough Dave showed up. I already wanted to open the door at the passenger’s seat, but then I noticed his daughter was already there, so I got in the back, only to be handed my camera by a beaming Rachel. It had been there after all! So I figured I could walk home happily now, but that was not taking Dave’s impeccable manners into account; I was brought to the front door. And that way everything came to a happy end!
Posted by Margot at 12:39