In a week of hard work, Emily and I would reward ourselves with a Tuesday of squeezing. However, the hard work proved too engulfing for Emily, and I drove to Dave to pick up a helmet alone. It was one of these trips: a squeezy one for the PCG midgets (epithet by Dave), and a mine for the full-grown members. Dave was in the process of packing his car, so we had a nice pre-trips catch-up.

The drive to Buckfastleigh was nice. I still have my head full of cotton wool, and driving while listening to music seems to be the best thing to do under such circumstances. You give the system a rest; something I’m otherwise not very good at. I was the first to arrive.

In one’s memory stories get more and more spectacular! I remembered the entrance as hardly bigger than a rabbit’s hole, but after many more months of crawling and squeezing I thought it looked big and comfortable. So I dived in after Richard. The squeeze into the main chamber, which took me a while the previous time, I now did in seconds without thinking too much about it. I’m surely in the process of needing bigger kicks to get the same thrill…

In the main chamber I tried out my flash gun. The previous time I was here I didn’t have it yet, and due to malfunction and it ending up among Dave’s stuff I hadn’t used it for a while. It was not much of a success, as by the time I found out the battery compartment was not properly closed which led to the batteries not properly making contact, we squeezed into the passage with the lovely aragonite crystals. I did manage, though, to make some nice pics with only the light of the headlamps. 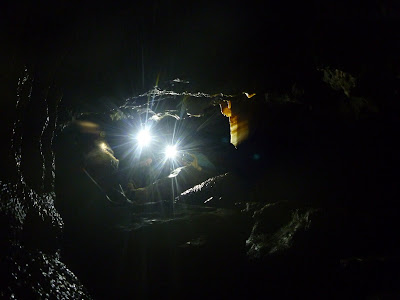 Always good to have people with bright lamps with you! As long as you can avoid being blinded... 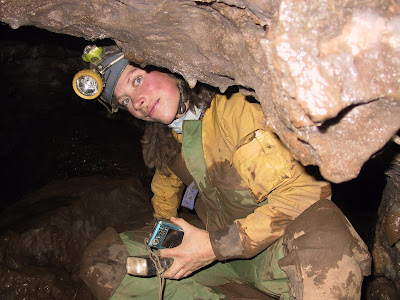 Pic by Mike
I figured I could not improve on the pictures I had made of the crystals the previous time, and beside that my hand-held torch had vanished, so I took one or two using Richard’s light, and then took the opportunity of having a man around with a lighthouse on his head to take some larger-scale pictures as well. In the end of the cave we just sat (or lay) down and just chatted away for a while. With Richard’s recently undergone surgery as inspiration, the topic hovered around blood and hospitals, but the tone was cheerful nevertheless. So cheerful Mike deemed it worthy to document this casual conversation, which he considered to be somewhat bizarre, for posterity. 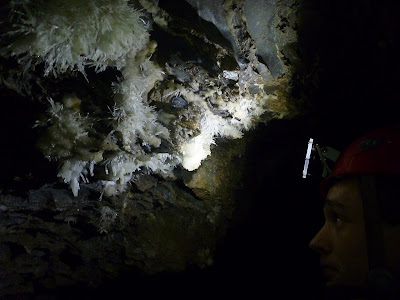 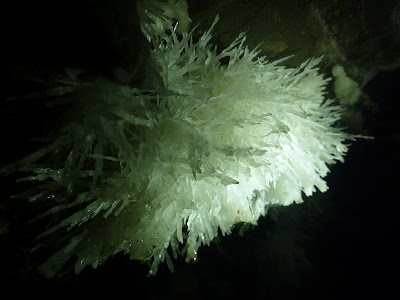 Couldn't resist taking at least some pictures of the pretties! 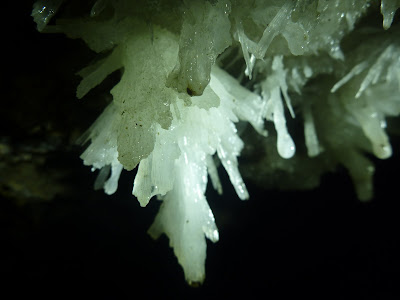 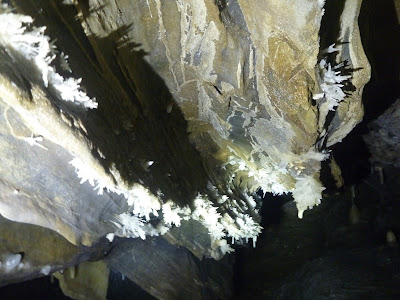 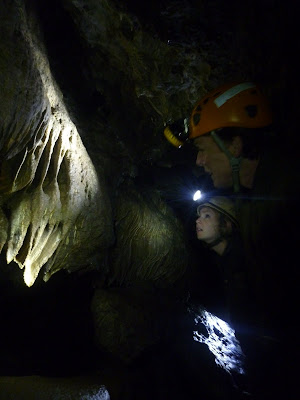 Karen and Jenny admiring a curtain
On the way back I continued a bit with failing to take good pictures with my flash, while the others, one by one, squeezed back. I followed through the narrow passage, of which I don’t know if it has a name, but it should be named “the passage of interesting sounds” as far as I am concerned. 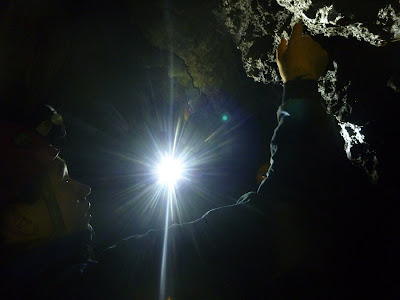 Arty-farty photograph of Richard!
On our way back to the cars the pull of the depression, of which Richard had explained contained another, smaller hole called Shaky cave, became too much for Mike. He suggested a bonus extension of our short but pleasant trip. And I thought that was a grand idea! I made my way down into the pit, and to my surprise I was whizzed past by Mike, who took a bolder, as sub-vertical and low-friction, route. This could have turned ugly. He however carried it off like a swashbuckling caving superhero, and politely let me go first into the entrance. Soon I found out his heroism did not reach further than that; I was on my own finding my way in this short and bouldery cave. But that was his (and the others’) loss; it was a nice treat! 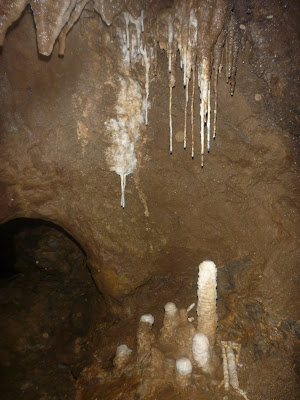 Some nice structures next to a beautifully shaped natural tunnel entrance
On the way back to the cars we were all struck by the beauty of the full moon, and I wondered if I could take a picture of it. And I could! Richard was glad to find some use for the tripod he had carried uncomfortably all the way through the cave without any discernible reason. And after we had managed to bully Mike into not spoiling these long exposure time pics with his headlight, and taken a nice one, we retired to the cars, changed, said our goodbyes, and went home. 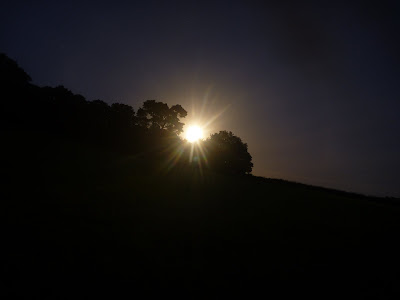 I took the sneak way back to Dave where I startled his wife somewhat with my late-ish appearance, as normally happens when I bring club kit back. And then, in spite of two caves, night photography, and Plymstock detours, I was home at about 22.10! That’s one efficient caving evening…
Posted by Margot at 17:20