I had hoped to impress Rob with the grand view of Tromsø appearing from behind a hill, but he was fast asleep when that happened. Understandably so. We were on our way from the field site to Tromsø, as Rob has collaboration partners there, and wished to see them. I parked at NP in time for the 2 o'clock coffee break, during which Rob, who had come back to life, met all sorts of people. Within minutes he was discussing raised terraces with Dierk. At the end of the coffee break Arto, our official host, showed up, which was good, for that meant we would get the key to the hybel, where we would stay. And it was fun to introduce the men to each other! It's always somewhat funny to meet people in person for the first time, after having corresponded with them a lot.

Helgard had invited us to a bacalao meal at her place, so we strolled through town, bought beer and wine, and shopped some shirts for Rob as he hadn’t had any spare time for washing his clothes and was getting somewhat worried concerning his personal hygiene. We were then ready to walk across the bridge, and enjoy the great food and multitudes of Germans. I’ll have to enjoy these while I can; there’s a great shortage of them in Plymouth!

Fairly late we got back to the hybel and to bed, and just slept until we spontaneously woke up. That turned out to be 12.30... the first lie-in of the fieldwork! So we just had time to visit Statens Kartverk again for aerial photographs of the unforeseen marshes, and then go to town for lunch with Arto. He’ll soon be driving gargantuan distances as well... on our way somewhere else we bumped into Tordis, so we had coffee with her too. And shortly thereafter it was time to decide on a venue for a catching-up-beer with whoever was interested. Blå Rock it would be! 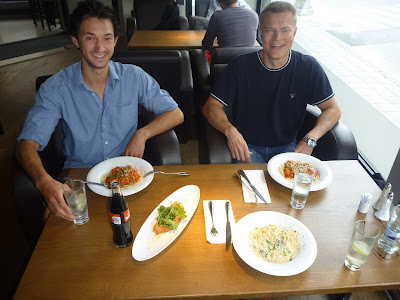 Lunch with Arto (right), not only my friend but also Rob's collaborator!
That was an interesting and varied night! Noortje the Dutch PhD student showed up, and Stuart the Directionless Intellectual, and Eeva the other Finnish Arctic Hero (Sanja is the initial one, of course), and some friends of Eeva, and then Laura the Hard-Partying and Hard-Sporting showed up; all sorts of people! Of course it was Laura and Stuart staying late, and suggesting turning this into a pub crawl, and try Verdensteatret or Driv as well. We restricted ourselves to Verdensteatret, where we had a frivolous time. It was a nice end to a short stay at NP! 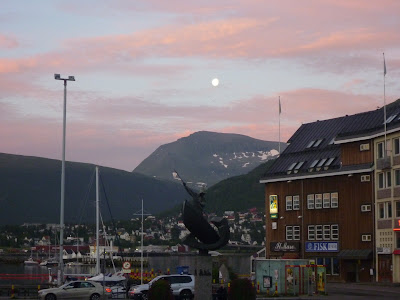 The moon, pink night clouds and Tromsdalstinden as we saw them on the way to the pub

The next morning I wanted to go to NP. Helgard and Tjarda had decided to not come to the pub the night before, and had suggested a coffee at the office. Rob was still suffering from the past weeks and was quite content to just moan a bit, and sleep on. So I did some more catching up with former colleagues until it was time to check if the young man would by now be out of bed (which he was), say our goodbyes, and go... very undramatically to the nearby supermarket to buy some supplies for on the road, but then we really left. Goodbye Tromsø, I’ll make sure I’ll be back!
Posted by Margot at 21:20