It’s not just me who likes Dartmoor! Whole groups of hikers like it. And one day I got an email from Jitske, one of the Dutch hiking regulars I still sometimes roam around with, that she would be leading a group of such people over the Two Moors Way. Interesting! And I would be in the country at the time. So after having coming back from Norway I assessed the situation, and figured I’d better go look for them in a weekend. And they would be walking from the south- to the north coast, so as I live very very near the south coast, the sooner the better. Which meant: the first Sunday!
Jitske had mailed me where she thought they would end up that day. And I had texted back I’d go and try to find them there. But no answer. I decided to give it a shot, and see if it would work out. The worst thing that could happen would be that I would have a lovely day on the Moors and would not find them!

My plan was to walk to the location she had indicated, and then walk back in the general direction of where they would come from. And the first part worked out. I was happily having a sandwich on the designated tor when she phoned. They were close! But that was only half the story. They had material problems... they had two camping stoves with them, and one had lost an essential part, and the other one refused for unknown reasons. And camping without an easy means of making fire is no fun. So the question was whether I was willing to go get mine, and lend it to them... and so it happened I was less than half an hour away from where they would stay for the night, but it would take me two hours, as I had to travel via home... 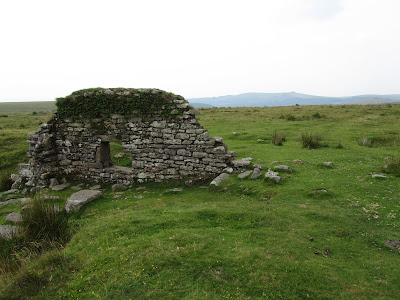 Shortly after 5PM I walked on the path to Nun’s Cross, and after a while, lo and behold, I saw some tents appear. There they were! I walked up to them, and was greeted happily. When you bring the possibility for a hot meal, people like you... so I delivered the stove, and a bottle of whisky, and two beers. I had not bothered to buy more that morning, as I figured my chances of finding them were not that big. But this way I did enjoy a pint in the sun with Jitske at a fairly unexpected place! And her hikers were impressed even in a different country she could just open a can of hiker friends to help her out if needs be. 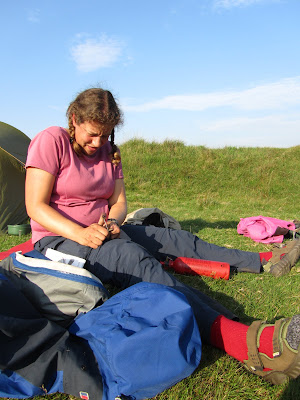 Jitske struggling with the dysfunctional stove
I stayed there, just chatting and enjoying the surroundings, while some of the group were putting that stove to use. Nice people! I felt very welcome. But after dinner I felt a little too welcome: the midges came out, which liked me very much, and I had not brought my mosquito net hat. Perhaps time to go... and as it was a wonderful evening, perhaps to go, but with a detour. To my delight Jitske joined me, so we had some time to catch up. And through the sunset we walked over the empty moors, passing decorative cows and cute foals, eventually arriving back at my car. We were about to exchange last words when a disturbing sound reached us; it was a foal thinking my side mirrors were good for rubbing on, thereby almost dislodging them. But we showed it the error in its ways, and soon I did say my goodbyes, and drove off into the dreamy twilight landscape. I hadn't expected that day to evolve like that, but it worked out well for all of us! And now I hope they don't get too much of more typical English weather during the rest of their trip... 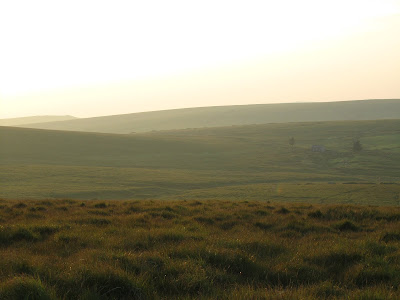 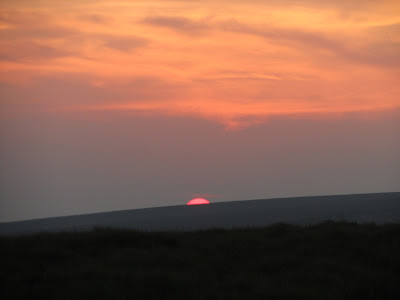