In the parking lot of the supermarket my eye (and ear) was caught by a juvenile seagull. It was standing deadpan on top of a mini convertible, and was pathetically screeching for attention. And it was shitting on the roof. I wasn’t the only one whose attention was drawn towards this feathered youngster. Many were amused by its shameless behaviour. Shameless by default, as as far as I know seagulls don’t know shame. And I went shopping, thinking of why really this seagull was so, well, cute. 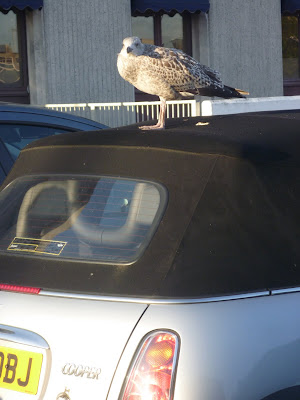 There is something funny about those outside human society who act in ways that would be grossly unacceptable within it. And we can safely say standing on somebody’s car roof and shitting all over it, and on top of that kicking up a racket an attract attention to it, is fairly unaccepted. Perhaps it simply is the contrast. It works for small children too. They may be inside human society, but have are not expected yet to abide by its rules. Rosa sticking her feet in her birthday cake is cute. Wouldn’t work as well if I did it.

So far all logical. But then I thought a bit further. With children it all works out; they are destined to become a proper member of human society, and can until that time show us why we abode to the rules by not doing it themselves. But what about the bird? In some way birds do not belong to the human society. They are not human, after all. But this one was definitely getting involved with it. Cars are fairly human-related. So can we divide the human and natural realm? Evidently not. And especially not if you integrate over time. That parking lot must have been gull territory before it got asphalted by humans. So is it not arrogant to judge them by human standards, and laugh if they violate our parvenu codes?

Coming to this arrogance conclusion makes me by the way think of “Dogville”. How a shitting seagull makes me think all the way to Nicole Kidman. A nice exercise! And probably no more than that. If this is a discussion it is probably destined to stay academic...
Posted by Margot at 22:47