When I talk about my caving adventures, during lunch for example, it often happens that people respond with a “that sounds cool! I’d like to do that!”. It happens more often that they shudder and say “rather you than me”, but the first reaction does occur. But this is England, and most people never actually do such things, even if they’re attracted to it. Marta, who evidently is not British, once joined, but never came back. And now Emily got the spirit! And yesterday she indeed joined.
I expected large numbers! Dave& Dave would be coming; one with daughter, and Richard, and lots of other people. So when we reached the designated place I reversed miles into the little country road, to make place for all these other cars. That would not come.

When we had changed we walked back to the road, where John and Cheryl and John and Marina had gathered. Richard showed up as well. And then the waiting was for Dave and his followers. That was it! Only ten people, and half of them women. Atypical! But Dave fitted everybody who had not come autarcikally with a helmet and a light, and then we could go.

Bedford Consols is small, but has very pretty features such as dripstone formations, tram rails, and flooded shafts. And we had Stephanie, Dave’s daughter, with us, and she’s a photographer, so we moved slowly. Lots for her to document! And we’re used to waiting for a flashing Warne. So we had a relaxing trip. And for Emily, who was happily prancing around in dark waterproofs, all of it was still new! We’ll see if she’ll be back… and if she caught only the caving virus, and not also the laryngitis virus I seemed to carry... but more about that later! 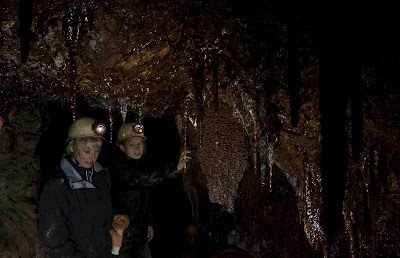 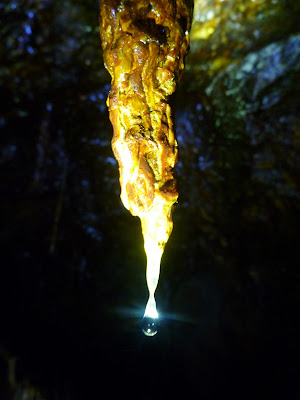 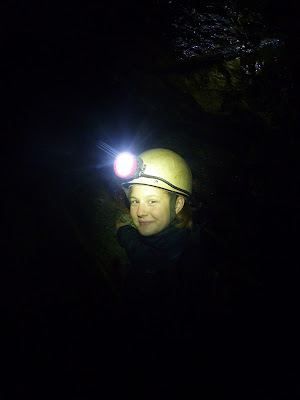 Emily in the dark 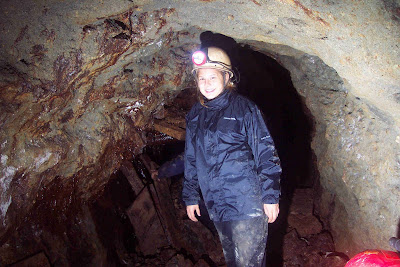 And in the light 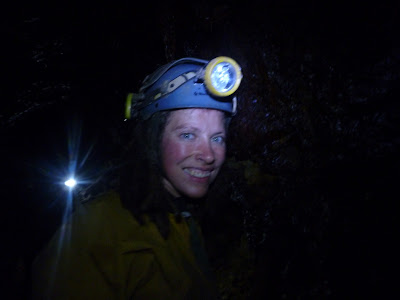 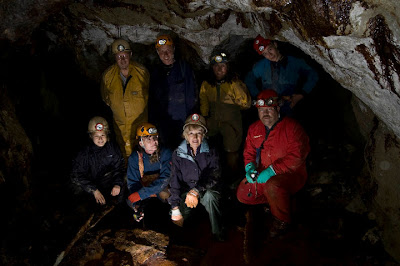 All of us, except Steph who took the picture, and John whose outfit was so reflective he was banned from the pitcure
Posted by Margot at 18:16

"Marta, who evidently is not British, once joined, but never came back."

Indeed! In February our Spanish PhD student Marta joined. And she did re-emerge from that mine, but never came with me again! http://mmmmargot.blogspot.com/2010/02/iron.html