Finally the day came I was going to properly see a physiotherapist! I had been wanting treatment for months, but clearly, these were the wrong months for it. I had spoken with several physiotherapists already, but I still think a physiotherapist isn't at their best over the phone. I think they can do more if they get to actually see a patient. And I had seen the local one for a few minutes, only because the phone signal in the village was down, but he wasn't going to take me on for treatment. He was the one who had referred me to the physiotherapist of the hospital. And now I had my appointment!

I drove up, and managed with difficulty to park my car. Then it was easy; he had told me where the Department of physiotherapy was. I found it and sat down to wait.

Soon he appeared. He brought me to a booth and asked me for the story of my arms. I told him. Then he did some tests; basically moved my arms into all sorts of positions and asked if that hurt, and asked me to make several movements and also asked if it hurt. His conclusion was that he agreed with the previous physiotherapists; it was a muscles/tendon problem, and I probably had an inflammation in there, and it was due to overuse. And to my surprise, he wanted me to train the muscles. He said I had just given them more than they could cope with, and if I trained them a bit more they would be more resilient. So he brought in some resistance bands, and showed me some exercises he wanted me to do. And he asked me to do them regularly. I got various bands so I could increase the severity; the various colours represent various stiffnesses of the material.

He also told me I wasn't going to see him for my next appointment, as he would be returning to the covid ward. The next appointment was going to be a phone consultation with one of his colleagues. That's the times we're in, I suppose.

When I got home I also received the exercises by email. It always helps to have a good reminder of them!

So now I'm doing these exercises, and I'm still doing the ones from the local physiotherapist. I have now ditched the ones from the very first physiotherapist I spoke with, as if I now would do all these exercises I would be busy from dawn to dusk. And something has to give! So I stick with the exercises given to me by people who have actually seen me. And I really hope this will help! The situation is still awful. If my voice recognition software stalls and I have to manually log out and log in again to get it to work again, I can feel it for the rest of the day. I am nowhere near back to normal! It will still be a long road. But at least now I have guidance. 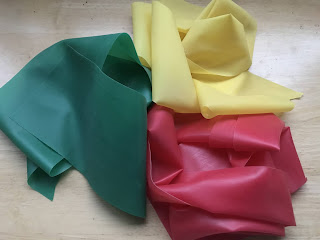