I am convinced that there is nothing anyone can say or do that helps against the pain of your child dying. I am also convinced that some things can make things worse. I could imagine that no one marking the passing of your child would be one of those things. So when the International Office of the University invited people who had known our student who had died to send a message of sorts to the parents, I wanted to make a gesture. I wanted to create something tangible as a message from the country where their daughter had gone. Something that had something to do with what she was studying here. And I decided to send them a shell of an ocean quahog (Arctica islandica), which is a very long-lived species of clam. As they live so long, they are beloved by people who try to make very high-resolution climate records. You can just count their annual growth lines, so you have absolute age control. And the calcite documents things such as temperature.

I had to personalise it, of course; I wanted her name on it. But I assumed her parents would think of her in Chinese characters. So I asked the International office if they knew what that would look like, and of course they did. So I did my best engraving them on the shell. I was a bit nervous; what if you get it slightly wrong and the character then starts meaning something else? But I think I stayed so close to the instructions it really reads like her name.

I don't think this gesture will make a huge difference, but if it gives them the faintest comfort then it will have been worth it! 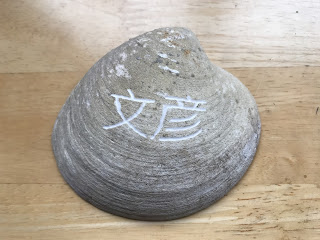