I became eligible to vote in 1993. I could put that right into practice the following year in my first parliamentary elections, which were won by Labour. In 2007 I left the country, never to return (so far, at least). All that means that I have spent approximately half my electoral life abroad. But I'm not giving up my Dutch vote. And there were elections again.

I know it is weird to vote in a country you haven't lived in for a long time, but given that I can't vote in the country I do live in, I'll take this.

I had already received my voting card; the piece of paper you sign to confirm it was you who voted by post. And recently, I was emailed the actual document with which you vote. These documents used to be more fun; in the olden days, you got a piece of paper the size of a newspaper with all the eligible people on it. But they had reconsidered! Now you just have to indicate which party you are voting for, and the number on the party's list of the individual you want your vote to go to. So I had to dive back into Dutch politics to find out who I will be voting for. It's not a big surprise; I tend to end up with the same party every time. And then I had to pick someone to individually vote for. I tend to go for the first non-white woman whose blurb I like. I've explicitly voted for women for a long time. I want women's voices to be heard in Parliament! And I also think the Dutch Parliament doesn't have enough non-white people in it. And my one vote won't make a difference, but it's all I can do. Should I have gone for the first non-white LGBTQ woman whose blurb I liked? Maybe. It's not as if the gay voice is sufficiently heard. I'll consider that for next time. I didn't this time!

Next month we will know that everybody else has been voting. I hope the results are satisfactory! 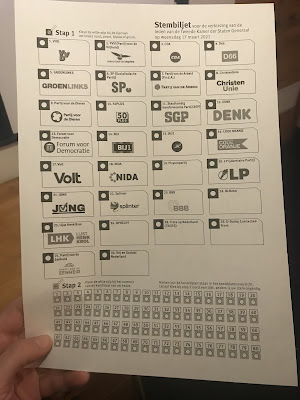 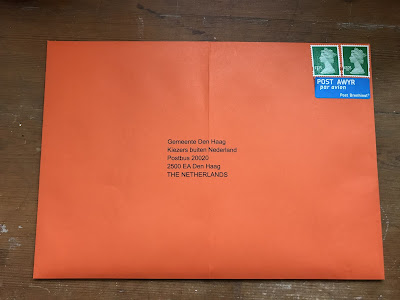