I don't make sourdough bread, but otherwise I suppose I am quite standard in my response to lockdown. And one of the things I do more often now is look at the birds in my garden. I have lunch at home every day, and I make sure I have my lunch with a view. And I happen to have a garden wildlife guide. And the previous owner of my house had left a pair of binoculars. And things got together then; I started looking at these birds bit more. I never knew much about birds; of course I recognise standard creatures like house sparrows and blackbirds and magpies and jays, and of course I knew that a blue tit is more blue than a great tit, but I had no clue with finches, let alone being able to identify the less common birds. But my binoculars and my guide helped, and I started enjoying noticing that, for instance, bullfinches seem to like my Himalayan honeysuckle, while my crabapple tree seems to attract mainly tits and blackbirds.

With that newfound enthusiasm for birds, I decided to sign up for the annual Big Garden Birdwatch. I like being able to add to someone's dataset by doing something I enjoy anyway! I just hoped there would be something interesting to see. There sometimes is; I have resident dippers, after all, and I have seen a woodpecker in my garden, and a buzzard in the tree on the other side of the river. I didn't expect woodpecker or a buzzard, but it would be nice if the dipper would show himself. But if it only would be some tits and a blackbird that would do!

It was a cold winter weekend that the count would take place. On the Saturday it was blowing a hooley, and it was an Open Day, so I decided to do my watch on Sunday. It was still quite windy, but not that bad. So I set to work!

Of course there were tits in the garden. And a blackbird. And now I had to make sure I correctly identified the tits. They don't like sitting still, but I made a good effort and I noticed that most of them were great tits, but that a few of them were blue tits. I had not confidently identified any of these in my garden before!

There also was a pigeon making an appearance, and a magpie doing a quick visit, and some gulls flying overhead. A bit later two corvids flew over, and even though I couldn't be sure I must admit I put them down as jackdaws, because I literally have jackdaws visiting every day. I don't tend to get crows. I also noticed a robin. By then I was getting really cold and I realised that all the birds I had seen so far I could also have seen from the window, so I retreated indoors.

With my binoculars I continued the count! I did notice some birds I wasn't sure of; my identification guide helped me there. Two of them were chaffinches, and I had a nuthatch! The latter one is actually really easy to identify, so if I see them again I will know what they are.

And then the hour was over. I had seen 10 species! Not bad I think. It would have been nice to see a bullfinch as they are regular visitors, but maybe they don't like this kind of weather. And when I submitted my results I compared them to the national results; I clearly have an unusually low number of house sparrows in my garden. They were the most common bird. Starlings are also abundant, but I don't get them very often. I think my nuthatch was the most exotic find.

I now have done my bit for citizen science, and I have learned something! I intend to join again next year, if life progresses in any kind of reasonable way. This is actually quite fun… 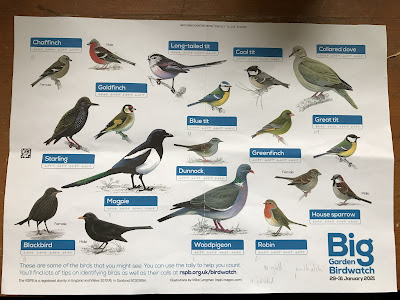