Filming in the field again

When the pandemic hit, all fieldwork was cancelled. We thought that would only be for the rest of term. The situation was more serious than realised at the time, and almost a year on, we are still in lockdown. In summer I decided I didn't think my autumn fieldtrip would be feasible, so I organised a virtual equivalent. And now it is as good as spring, and we are still unsure about taking large numbers of students into the field. So for one of our first year's modules, we decided to go virtual again. And that meant going into the field to record footage.

We would go on a Monday. That Sunday the weather was atrocious. The forecast for Monday wasn't bad, though! But things can change quickly. And when I was about to leave, I made sure I was dressed warmly, and waterproof.

I found more warmly dressed people at Ogwen cottage. I did a little introduction at the cottage, and then we started walking up. It started to rain! And it wouldn't stop again. And the wind was strong. Not ideal circumstances for filming!

I decided the first place to stop would be in the shelter of the big erratics close to the lake. We talked geology there. Then we walked on, and in the shelter of a wall we talked geomorphology. While I was talking, the rain intensified, and I started to worry about the camera. I knew this same photographer had buggered a camera in this very valley photographing this very excursion before! No need to do that again.

We got to the top of the lake, and talked about the two types of volcanic rock we had there. By then I could feel the rain on my skin! My jacket isn't as waterproof as I would like it to be. And then it was time to get back to the rock step from which you can look into Nant Ffrancon. We found a sheltered spot where the wind wouldn't blow away our words too much, and filmed the last bits. You could just about make out the features that we try to point out from there in the horizontal rain.

We'll have to figure out what to do in the session we actually have with the students, but we now have footage! And I think that when they see it, they might not feel too bad about not having been in the field with us themselves… 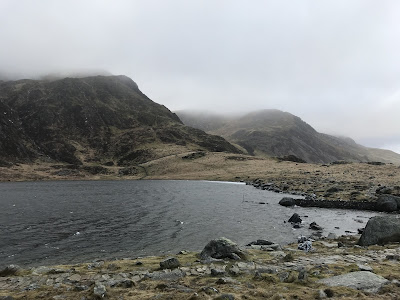 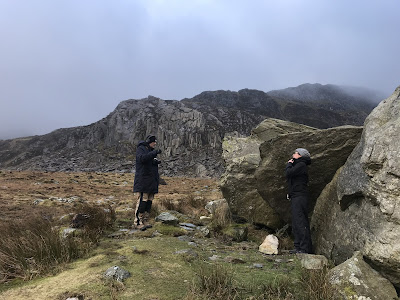 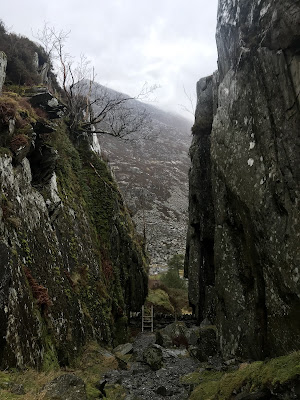