Since late March last year, I haven't been to a pub, I have been to an indoor café twice, I have had no social visits, and the only time I paid someone else a social visit was at Christmas. I have seen people, of course; most of the time it was legal to go for a walk with someone. But life has undeniably changed quite a lot. And I am fine, but there are a lot of people who are struggling with this. I know for sure that I would have, if this would have happened earlier in my life! And I had a few bad days in autumn when the combination of threats to my job, the severe RSI situation, and brexit worked together to make me feel rather vulnerable, but that hadn't lasted. I have adjusted to this situation swimmingly, if I can say so myself. But I think a lot of people who live in some sort of family configuration think that sitting out a Welsh lockdown (which is a lot stricter than an English lockdown, for instance) on your own is very hard. I clearly remember, for instance, discussing with my sister, who is the matriarch in the family of five. The idea of having to spend almost a year cooped up with four other people sounds horrendous to me! She thought that doing it alone would be horrendous. It was good that we both thought it was the other one who had the tough time. Both of us were actually doing well!

I think there are more people who think it is horrendous to sit out lockdown on your own. And I suspected my friends of the cat are among them. It turned out that they were happily taking all their other pets with them to their new rented accommodation! And it seemed somewhat unlikely that you can take two dogs and a cat, but not an additional cat, so I wondered if there might have been an ulterior motive in their question if I wanted to look after their cat. They might just have decided I was lonely and that what I needed was a cat, but that I was in denial, and wouldn't get one on my own initiative.

Given that I am not English I just asked them. They said the new accommodation allowed for two pets. They had managed to convince the landlord that they were an exceptional case that could bring three, but that four would have been pushing it. So hence me and the cat!

And she is here to stay for a while! My friends have signed a tenancy agreement for a year. And a year is a long time! I know what my life will look like for the coming few months, but sooner or later we will be going back into the office and that will change things. I don't think she'd like it; she already objects to me not interacting with her for eight hours straight during the night! But of course, we also might run into the next round of budget cuts and redundancies, and that would change everything all over again. We'll see! We'll make work somehow.

And is she therapy? Well, in a way, she is. She wants me in the living room, interacting with her, and that helps me not spending all day every day in the office. And she's just super cute. Even if she's only asleep in her basket downstairs. It looks so snug! It calms the soul. I suppose this worked out well… 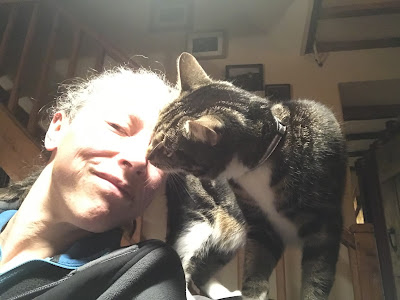