It was that time again, I was called up to bake for the Ocean Sciences Cake Competition. It's always a bit of a faff! But a woman's gotta do what a woman's gotta do. I did what I tend to do and googled a recipe. Sometimes people put vegetables in their cakes, and I like that, so I decided to google courgette cake. I found a recipe for a cake that involved both courgette and avocado and thought I'd go for it. So I did! As usual I had to bake it on Wednesday evening as on Thursday evenings I'm away. It started with the vegetables. I had a an aggressively green batter! Which turned into dough with the addition of flour. The cakes ended up golden brown. On Friday morning I added icing (I don't like icing, but these cakes needed something to look more glamorous) and off I was. 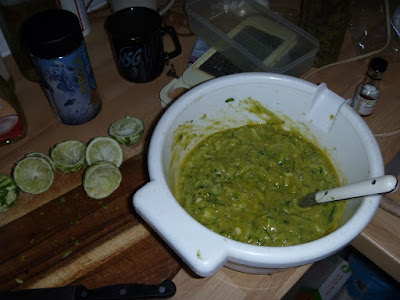 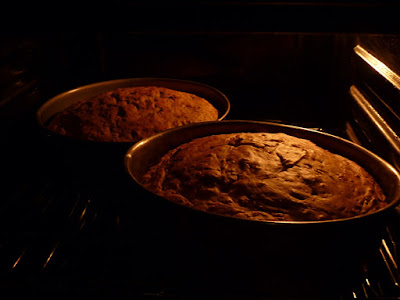 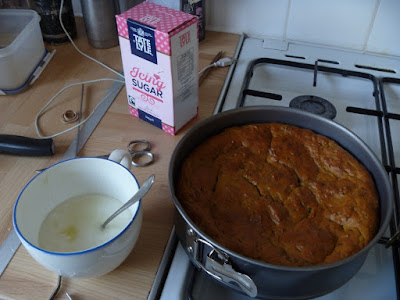 The icing ready to be added

My rival turned out to be a lovely Madeira cake. When I tasted it I knew I would lose! And that's fine, I'm not a keen baker but I will try for a good cause.

I was eating my cake with some colleagues. One at some point one of them stood up to go. He still had some of my cake left! He wrapped it into some kitchen towel and I wondered if he was keeping it for later. He said He'd throw it away. And then he realised the baking is anonymous, and I may very well have baked it! I saw him sweat. Oh well. It wasn't all that good! It was slightly dry. Probably because I had been worried (considering the ingredients) it would be rather wet.

Later the email came through; indeed I had lost. Oh well! I had hoped for that, even though I always do try to make a good cake. I think practice makes perfect! And I don't practice. I'll do my bit eating and donating for the rest of the competition!
Posted by Margot at 10:36