Having the house surveyed

My mortgage provider thinks the house (and the ground it stands on) are a fine security for my mortgage. I want to know a bit more about it! So I hired a surveyor myself. And he suggested he'd have a look at the house, and then at the end I would show up so he could show me things. That sounded fine!

I drove up on a sunny day. When I parked up I saw a bloke with a ladder. That must be Stephen, the Surveyor! And it was. He immediately showed me around. He said the inside was fine. No complaints! But he pointed out a few aspects of the outside that probably would need work in some decades time. The drystone walls that demarcate the garden were doing a bit of bulging and losing rocks. A wall needed painting. The extension had a few cracks in the wall and might need underpinning in the long run.

Things he didn't like at all were the garage roof. It's felt the tooth of time! And he didn't like the rendering on one side of the house. It sounded hollow, he said. It had to be replaced! Oh dear. He estimated that would be £2500-3000. Hm!

We then went in for a cup of tea with Rose. We discussed things a bit! She said she had had the other wall re-rendered not too long ago, and the guy who had done it didn't think the other wall needed attention too. She gave me his number. We also discussed the garden, and a guy who mows the lawn (Rose has a slightly dodgy back), and such things. And all the paperwork the solicitors throw at us.

Stephen then left, and I chatted a bit more with Rose. I will have to think about that rendering! Maybe the surveyor is being overly cautious. And she told me the pub the house once was was called the Territorial Arms. I soon googled it: nothing! But it's nice to know.

I expect the report soon. Stephen will also report back to the estate agent and they probably will pass it on to the solicitor and the mortgage lender. We'll see! And I'll phone Gary the roofer... 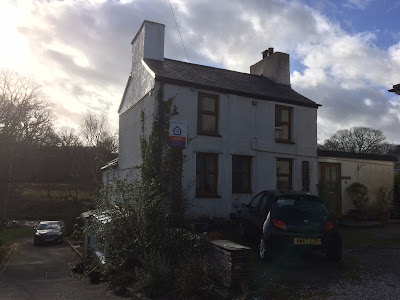