Only two weeks ago I had a guest speaker over. And now I already had the other one! This time it was Tasha, with whom I had done two research projects, as postdocs. We had been doing fieldwork together since 2009. I have turned towards teaching while she is firmly lodged int he research community. And she does very well! Which comes with a lot to talk about in a seminar.

She would arrive by car, with her husband Jack; he would drop her off, go biking, and then collect her again. She phoned me when she had arrived. I greeted them both and took Tasha to my office, and then to the lecture room.

Her talk was, as expected, very interesting! She is still working on sea level changes on the timescale of hundreds of thousands of years. It's a tricky topic; the only places where sediments from other periods of high sea level are preserved are places where the land subsides. And then the question is: how much has the land subsided? But if anyone can figure that out it's Tasha.

One of her take home messages is that climate models predicting sea level rise tend to give fairly modest results; no more than a meter by 2100 (although that's a heck of a lot for many coastal communities). But during the previous interglacials, sea level was higher by some six meters at lower CO2 levels than we have today, and temperatures only marginally higher. Are the climate models missing something? And when will we find out if they are?

After the talk we went to the pub; Tom and Lynda joined. That was nice! And then she did a bit of work on her laptop in my office. And then it was already time to say goodbye!

It had been great to see her! And I hope to stay in touch. She's still doing very interesting stuff! And it's nice to keep in touch with old friends. Maybe within this year I'll be able to tell her where my future lies... 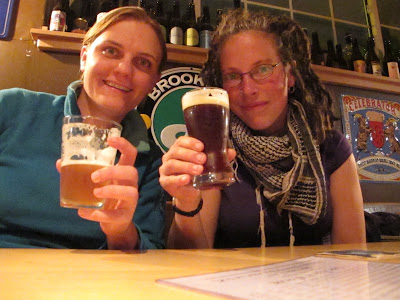