A crawl down the Ogre. It sounded mythical! It was the title of a talk one of my climbing mates mailed about. She was interested in going. It was a talk by some Doug Scott. I had never heard of him or of the Ogre, but some light googling sorted that. It turned out Doug Scott had been a prominent British mountaineer, and that he was famous for a first ascent of this mountain in the Karakoram range, called the Ogre, during which he had broken both his legs and had been forced to, yes you guessed it, crawl all the way down. This had been in 1977. These days he still climbed but his days of daring first ascents were obviously over.

Four of us would go; one also suggested eating in the cafe where the talk would take place. Good idea! But then one of the ladies was ill and dropped out, giving her ticket to one of the other ladies; the initiator fell ill on the very day and pulled out without replacement. Oh dear!

I drove up with Ika. Once there, I found a man who had been in the CasCare course, and I invited him to join us. The Heli appeared too. We had some gulash and awaited the start of the talk.

When it started the man did not start at all with the Ogre story. He explained he was doing this series of talks for his charity, which supported local communities in Nepal; he had been involved with that for a while, but had been pulling some extra weight since the big Nepal Earthquake of some two years earlier. What a good idea!

The he got to the Ogre story. Blimey what a bunch of daring types! That mountain looked intimidating on the best of days, but they also had decided to climb from a advance base camp with hardly any luggage. Climb up, take some pics, climb down, crawl into your sleeping bag in the camp, was the idea. You guessed it didn't work out that way.

They summited rather late in the day. They had no tent with them, no food, no sleeping bags, no head torches. They had to get down rather sharpish. But things worked out differently. Soon after summiting, Doug slipped and broke his legs. He had to abseil to a snow ledge as was, and somehow get through the night, with one mate. That was cold!

In order to get off the mountain they actually had to still climb. The ridge had sub-peaks! Oh dear. And they were cold and tired and hungry and thirsty and he was in pain and couldn't walk. Awful! It took them a long time to get to the first camp. There was no food there either, but at least they had a stove, and they found some used and discarded tea bags. That was their sustenance! And on top of that, their sleeping bags had got wet.

They were still days from the foot of the mountain. They had no food whatsoever anywhere on the mountain! And along the way one of the other guys broke several of his ribs. That didn't help the situation. They actually also had one bloke with bronchitis and one with a different leg injury.

When they finally got to the actual base camp they found it deserted. A note pointed out the men they had expected to find there had assumed they were now dead. They had left some food, though. Not an awful lot and not necessarily the best, though! The fittest of the lot set off to try and catch up with the people who had left the note. They were keen to avoid their families to be informed they were dead!

The bloke who had rushed off managed to overtake the surprised others, and soon a party of Sherpas was on its way to go get the injured. And bring them food! So all was looking up. And after some days (maybe even weeks) all were back in the UK, receiving medical treatment. They had made it. And the man still has a good story, all these years later! It turned out he had been writing his autobiography, but that he had ended up writing so much about the Ogre stuff he had decided to give that a book of its own.

After the talk, Scott auctioned off some framed and signed pictures from his trip, all for his charity. Then he signed books and posters. I had a poster signed; a picture of him crawling through a snowstorm. A poignant image. And then we were off!

I think Doug Scott is an inspiring man! He is a good speaker. And clearly does good work. And he must be stubborn to make it alive off that mountain. Would I want to crawl down a mountain that was so difficult it took (IIRC) 23 years before it was summited again, in pain, and doing without food for five days, and having only a wet sleeping bag, and that only after the first night? Not really. Would I have made it? I don't think so! But I'm glad he did. Bring on the good work! 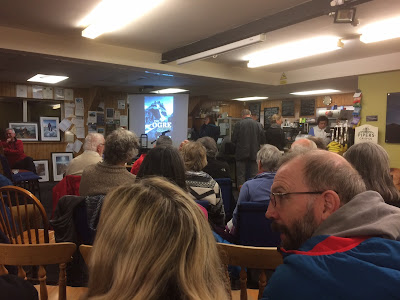