It was that time again! Half term in October, so the Dutch hikers were on their way again for the annual swamp hike. Lovely! I saw a car pull up at exactly the predicted time, and I scampered out to greet them all. This year we would be with six.

We got ready. We did some re-packing and last time changing and some talking through the route. And then we were off! We would drive down to Waunfawr in two vehicles, leave my car, squeeze into the rental car the others had brought, and drove to Dolbenmaen. Or rather, to Porthmadog, as we had forgot to buy more bread in Menai Bridge. But that's only five miles further. And then we could park up in Dolbenmaen and start walking! It was beautiful there, and the weather was good. It was only 3PM and we were off! Excellent. 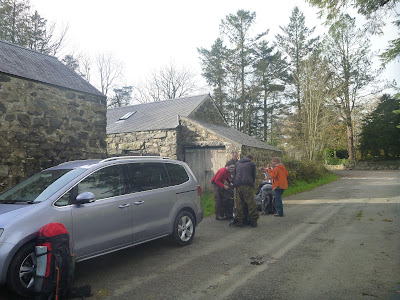 Where it all started!

Soon after we left the road (which was after minutes) the navigating became a bit tricky; the public footpath had sort of vanished and we had to improvise a bit. But we went in the right direction. We ended up on a slightly different path but all was under control. Even when we crossed a brook only to decide the most efficient way on was crossing the same bridge again and finding out own way. After a while Sleutel saw a stile and got us back on track. The path was mildly boggy and the views were nice! 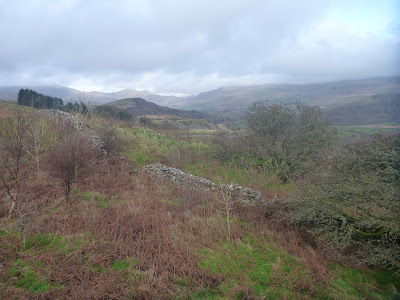 We walked up to a small lake I had seen on the map and which seemed a good place to stop for the night. We had only walked two hours but it was enough! The field was a bit boggy but we were already in absolute nothing. It was rather scenic! And I quickly went for a bath at the lake. Viking had lugged six cans of bokbier onto the hill. We enjoyed them! And then some lovely cheese fondue courtesy of Erik. This year we didn't have Roelof, so we could go wild on cheese. 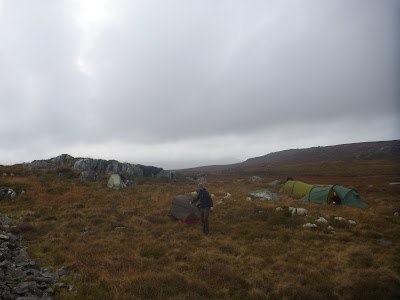 
We sat outside for a while, talking away, and watching some strange wandering beam of light which we attributed to a chainsaw murderer. The it was bedtime. For the night, I swapped places with Erik, as I was still a bit under the weather and I had coughed myself awake 2.30 AM the previous night. I didn't want to do that to Viking too! So I got a night in Erik's comfortable small tent and I didn't cough. Good!

The next morning it was a bit foggy. No worries; it might lift. We could either walk over Nantlle ridge, or through Cwm Pennant. We chose the ridge! And it started a bit difficult with an invisible path, but it came and went a bit and it wasn't too bad. Navigating was easy! And it was rather swampy. 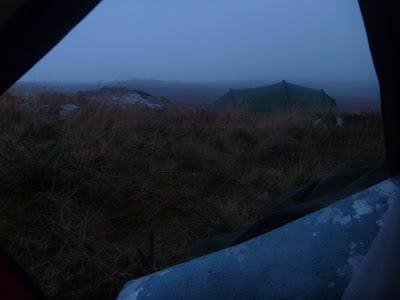 What I saw when I zipped open the tent 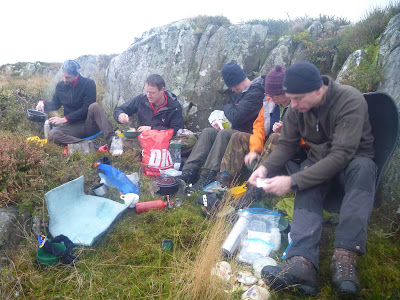 After coffee out job was to climb the first peak of the ridge. That went OK! Part of the way there even was a path (which was not on the map). On the ridge there was a path, but it went over a lot of loose slippery rocks so it wasn't very fast. And the views disappeared again. 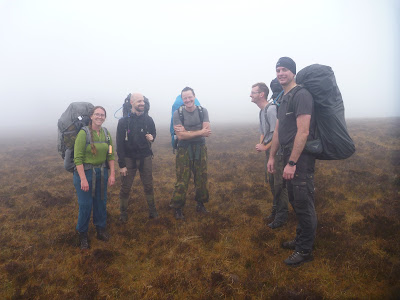 Hikers in the mist


Where the path veered left at Craig Pennant we lost it and found a bloke I had met during the CasCare training, and his family. That was fun! Soon we found the path back and moved on. We ate lunch on a ridge from which we occasionally had some view. We were getting a bit tired! 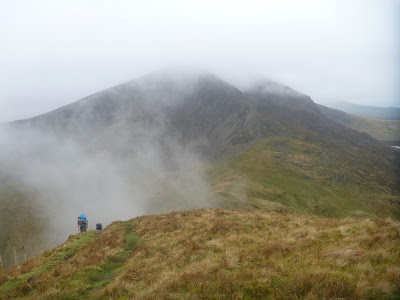 We had to climb the next ridge, to Mynydd Tal y Mignedd, which was considerable. By then we were really tired. We had more to go! But the day was drawing to a close. After reaching Trum y Ddysgl we decided to cut the walk short by bush-whacking down to a logging road an d skipping the last peaks. We could have camped in the woods but we decided to push on; that way a pub lay! I'd been there before...

It got dark while we walked back to Rhyd Ddu. We needed our lights at the end! I had hoped to camp at Llyn y Dywarchen as it looks nice, but we wouldn't manage that; it would have to be Llyn y Gader. Oh well! It's not an evident place, and we couldn't find a good spot for the tents. We decided to just camp on the path itself. Nice and flat! So we quickly pitched them and then went to the pub. Beer! 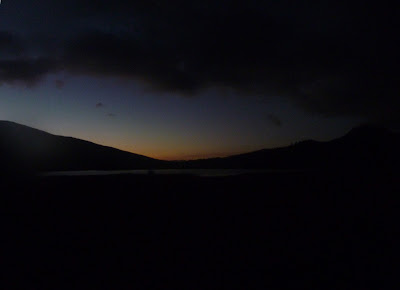 The lake as we found it


Dinner was nice. Afterwards we went back. After Nantlle Ridge with a big bag I was quite sweaty, so even though it was rather late and we would pack up early the next day because we were on a public footpath, I grabbed my towel and had a quick wash at the river. Nice! And I slept like a log.

The next day it was clear. We got up early as we were on a public footpath. We packed up the tents, walked to Rhyd Ddu station, and sat down for breakfast. It was nice! And it was only 9AM when we set off on the Rhyd Ddu path. It was a lovely day! And it would be up for hours, but that was OK. We scampered a bit, had coffee on the slope, and walked on. There were more people out, but it wasn't annoyingly many. The views were amazing! Not a cloud to be seen. And you look out over beautiful Cwm Clogwyn, which is nice. The ridge of Bwlch Main is spectacular. And then we were up! It was only about 12.30 and we were at the peak. It was busy there! There were trains going so the top was a crowd. Oh well. We admired the view and quickly scampered on. We wanted to come down Llanberis Path for a bit, so we could walk on until the Snowdon Ranger path and Miner's and Pyg tracks veered off. That would get rid of some of the people! 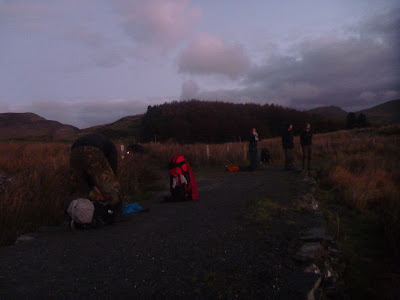 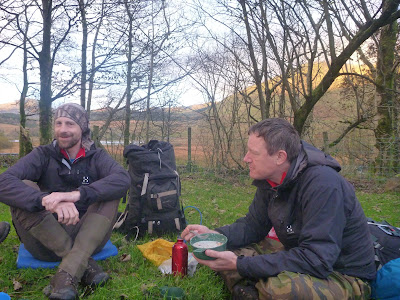 Breakfast while the sun comes out 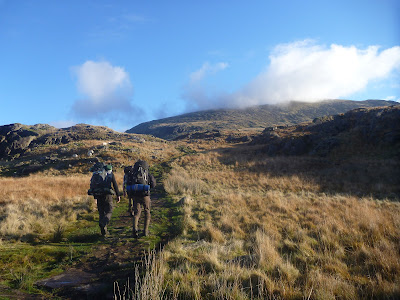 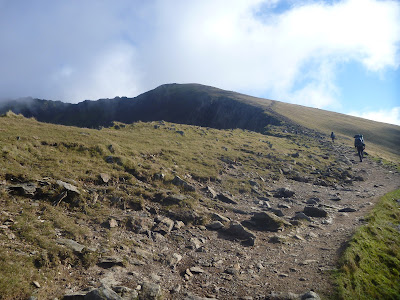 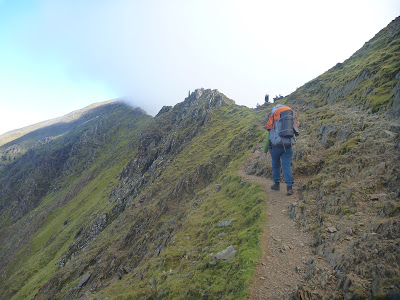 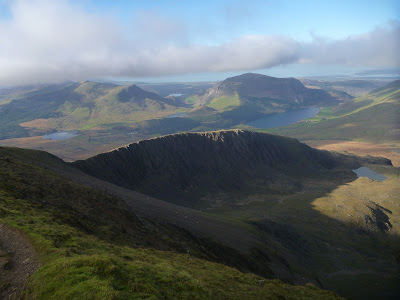 Llechog seen from the other side, and Nantlle Ridge and Mynydd Mawr in the distance 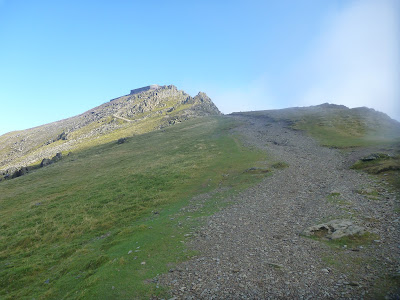 The top (and its cafe) in view! 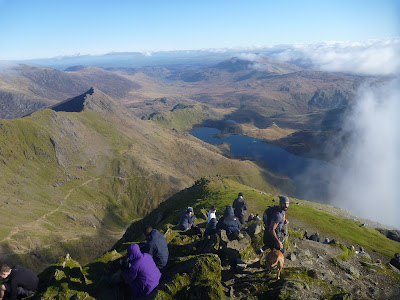 Amazing views from the top 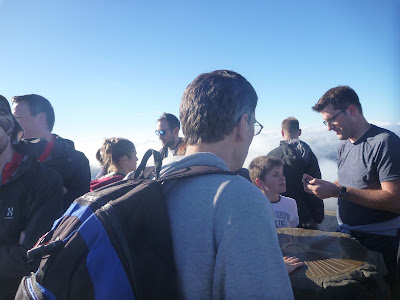 When the Llanberis Path veered left we went straight on to have some lunch. The views were nice but it was a bit cold. There were clouds appearing! We quickly went on while the cloud descended further. We took the path to Clogwyn Coch mine and upon reaching the first ruin, put down our bags. The more energetic among us went scouting for a camping spot while the rest of us lay down. We were tired! 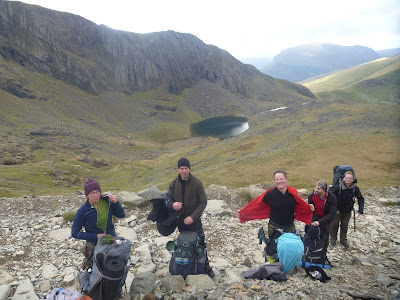 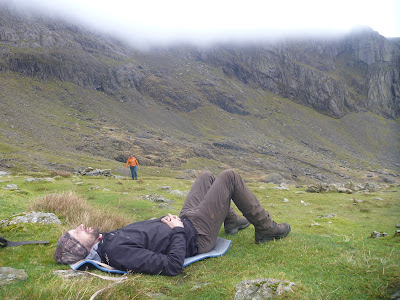 Henco found an amazing spot and we went down. We pitched the tents nice and early. Most of us then went for a wash. Viking suggested even a swim, but it was very cold. I chickened out! But the wash was nice. And then we sat down for some whisky! It turned out we had some four supplies of it, but they hadn't come out yet. It was nice!

We later decided to cook in the mill ruin as the wind had picked up. It was nice and atmospheric! And the evening colours were nice. It was all good.

Evening colours over the lake 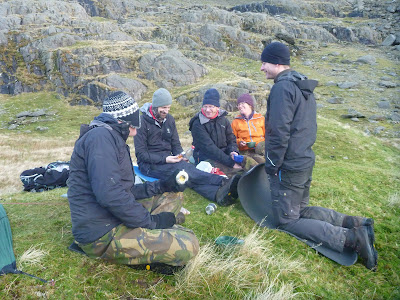 Erik is impressed with the whisky selection 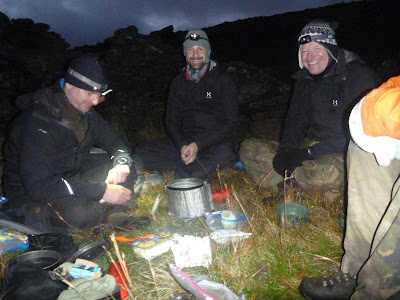 That night I slept well, in spite of having drunk so much tea I had to get up at 1AM to go for a leak. That turned out well as Viking's air mattress was a bit leaky, and my departure gave him the opportunity to re-inflate it. All good! But when Erik started to wander around in the morning I wasn't really done sleeping. Oh dear. But I gathered myself.

It was foggy again! Quite atmospheric. We had breakfast and decided to go down via the Llanberis Path. It was quiet at this hour and in this fog! We moved fast. And when we got out of the cloud the first thing we saw was a bloke crawling up the path. He was raising money for charity! Blimey he wasn't doing the easy thing. We gave what we could (I had to do it afterwards as I had no cash whatsoever with me; you can do that too, here) and moved on. At Hebron station we crossed the valley, and took the path through Maesgwm, back to Nant y Betws. It was still foggy! We had some company of two mountainbikers we kept leapfrogging. At some point another biker came the other way, so he was going downhill; he shot past. And turned out to have left his dog behind! Poor thing. The uphill-going bikers stayed with it until its owner returned. 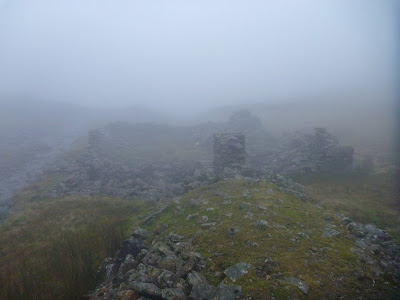 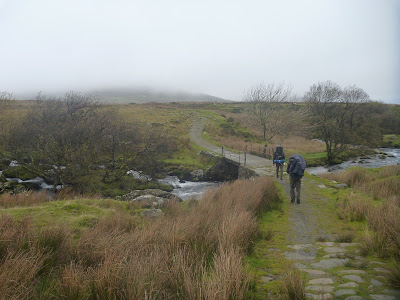 Crossing the stream at the bottom of the valley

When we got to the pass we had lunch. And decided to walk to the road. Any other option would leave us in the fog! And upon reaching the road we saw there was a marathon going on; we clearly caught the tail end. That meant a lot of people around, smiley people, and also that all cars were used to pedestrians on the road. We stomped along until, at Betws Garmon, we could leave the road and get back onto small paths. 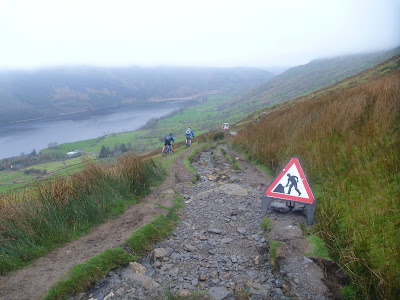 By that time it was time to look for a place to stay. There was a copse to the left and a quarry ahead; we chose the quarry. To our surprise, though, we were kept away from it with tall sturdy fences. Weird! And not very Welsh. We decided to walk on a bit and follow a logging road up into the next copse until we would find a better place. At its end we did. Good! We were all tired.

We pitched the tents and I washed. Then we had plenty of time for silliness, whisky, and spekkoek. Nice! It was the last night... 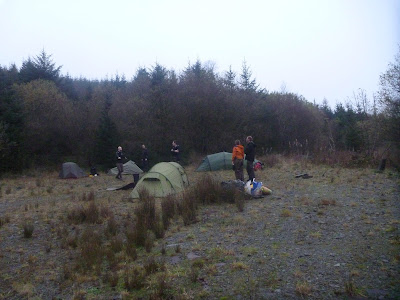 The next morning it was clearer. We had breakfast and packed up. We tried to walk back to the road via a nice small path but it vanished in a logging area. We gave up and walked along the road. Oh well! It wasn't far. Soon we reached the car. We dumped the backpacks and checked if the local pub was open. It was! So Viking and I said bye and went back to the car, drove to Dolbenmaen, retrieved the hire car from there, and returned. We picked up the others and, via a supermarket, went to my place. There we had a feast of a lunch, and the others showered.

Then it was time to say goodbye! It was another successful episode of the Swamphike, as far as I am concerned. So what next? Will it be Wales again next year? Who knows!