I've not been employed on the BRITICE project for about a year. I am still invited to the annual meetings, though! And I was feeling a bit self-conscious about it, because of having been pretty much only teaching since the last meeting. But I didn't need to. When the programme came through I saw I wasn't expected to present anything. Good, as I wouldn't have had time to prepare!

I had moved the lectures I had on the two days of the meeting, and booked a train. I travelled with our PhD student Ed. That was nice! We got there in time. When we walked into the room, the first people we saw were James and Lou. Excellent!

My next worry was out of the window soon too; we had been writing a manuscript on one of the transects, and it had stalled a bit. Not how it should be. The first thing James said, though, was that he realised the ball was in his court. He even added he needed to hack away at the brambles that had grown around it. But he would go on a cruise soon, and would perhaps have time to work on it, during transit time.

Then it was time for lunch! It was excellent. Then the talks started, and it started with the transects I was involved in. Tom kicked off. He had turned the Minch transect into a really slick manuscript! I was impressed.  He struggled a bit with the Shetland transect. He'll work it out! 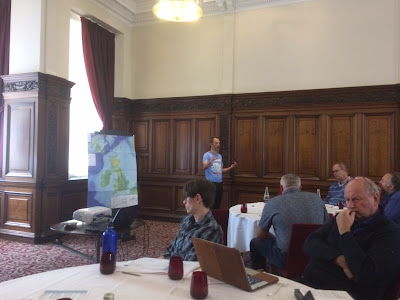 Tom talking about his transects

Then it was the turn of James and Chiv, talking about the transects from the first cruise. They also seemed to have stuff under control. Good! Then the other transects followed. They were interesting too, but it's different if you have not been responsible from any of it.

I was chairing the session after the coffee break and had to improvise a bit. All transects had half an hour scheduled for them, except the last. I thought that might have been on purpose but it wasn't. So we overran! And James had another talk, which was listed as a 20 minute talk, but in a 15 minute slot. Oh dear.

After the last talk I checked in and checked some mail. I saw I had a message from Norway! More about that later. I went down and had a beer with the others, and then dinner. That had place in a nearby Indian restaurant, where we were presented with a buffet. Many of us misjudged the spiciness of some of the food! James spent the entire evening beetroot-faced and dripping with sweat. Oh dear. 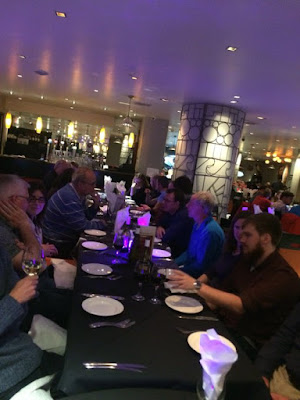 After dinner I went straight to my hotel room. I didn't want to wear myself out! And I had a good night's sleep. The next day we started again. The modellers showed their work! That was very interesting too. And in the coffee break I sat with Ed and James, talking through the two manuscripts we were working on. That helped! I wanted to change the set-up of our manuscript. Luckily, James agreed.

Then the meeting already came to an end. It was only two half days; people had to travel too! Including Ed and me. We had some time to kill before our train went. I did some teaching stuff...

Travel back went smooth. I was back in Bangor before six, so I could pop into one of the university buildings (it closes at six), and do some more work while drinking tea. Then I went on to Welsh class! A long day. But it had been good! Teaching will end at some point and then I can go and work on that manuscript. We need to get that published! And a lot more articles will come out from the rest of the project! And maybe I can come to the last annual meeting next year too... 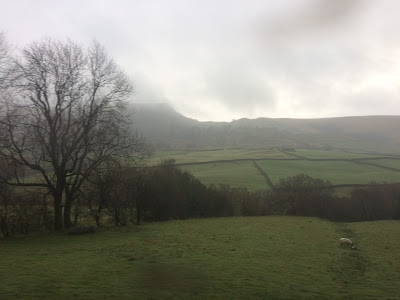 View from the train on the way back
Posted by Margot at 08:30