Back to the dig after a month

After Miles having been gone and me having been gone it was time to go back to the dig! We had altogether been away for a month. That dig won't dig itself! But we were on a low-key mission without a drill. But that was alright; I was running out of room at the top end. It was time to do some tidying. So I did! Miles wasn't keen to come up so he just cleared the stuff I chucked down.

This configuration meant he was a bit limited; I noticed I could, with some luck, throw rocks straight down. That meant he had to spend most of the time at a very respectful distance. Even though most rocks needed several shoves as they got stranded along the way, you couldn't count on it, so he had to be prepared form them plummeting all the way down.

When I was up I noticed something that worried me a bit; the big rock I was tunnelling under seemed to be sagging. It was leaning against the wall, but the rock was split and looked like it was ow only leaning on a remaining bit of less than an inch thick. Oh dear! Maybe that rock had to be blown up. That would bring a lot down! But sometimes that is unavoidable. At least I had more space for all that rubble now!

Miles in the meantime had been back to Generator chamber (there was bara brith there) and had noticed it seemed there had been people. Strange! We expect to know about it if anyone does. But maybe they were occasional and incidental visitors. The mine gets a lot of footfall over a month... They hadn't caused any mayhem but Miles wasn't too happy about it; he leaves things down there that aren't especially expensive, but are still best if not stolen or tampered with. I suppose it is safe to say that here; would anyone read this blog be keen to get their hands on a key so they could ab down and then, less comfortably, clamber up again, this time with a generator? Or a pump? Not overly likely.

I in the meantime was happy with the amount of progress made. It had been getting cramped; by the time I came down again there was quite some space. And that was the mission for the night! 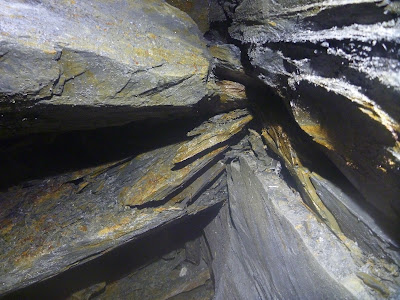 The splitting rock (coming in from bottom left)

Often this kind of blog post ends with us coming back up, but not this time. When we were driving down we saw a light on the parking lot. Miles wondered if it was a car; to me it looked more like a fire. Hm! What was it doing there? And a fire it was. Luckily we saw, when we got closer, that it was quite far away from my car. It wasn't especially close to anything, fortunately. It was some furniture and boxes and the likes. Fly-tipping and arson combined! And when I was closing the gate something in it exploded. And the fire got higher quickly! We must have seen it soon after it was lit. 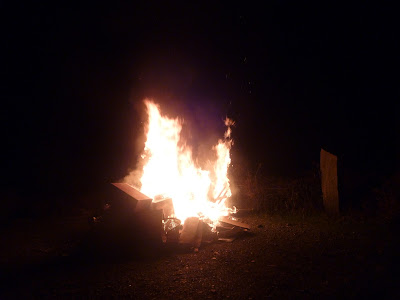 The fire as we found it. It was a lot higher minutes later!

Miles decided to phone the relevant authorities. How much higher would this fire get? And if the wind would pick up things could get worse. I said bye and set off. But when I got home I saw I had a barrage of messages from the Thursday nighters, who had been visiting Hen Ddiffwys. That's on the other side of the valley, and they had seen the glow from there. They were worried it had something to do with us! And not an entirely unthinkable thought; if anyone is capable of accidentally setting his car on fire it's Miles. But we were fine! I quickly confirmed that. Later I would find out they had actually set off to check, but had bumped into the fire engine which was refilling with water and of which the associated people had told them all was well. Nice of them!

And the next day I checked my pictures of previous episodes in the dig; the rock had already been splitting before! For decades, probably. I might still want to blow it up. Next time we get there!
Posted by Margot at 10:13