Last year I made my debut in the cake competition. I lasted two rounds!And I figured I needed to show my good will again so when the call came, I registered. I figured I would have time at half term, when there is no teaching.

I was a bit wrong. I had that week for doing some rather intensive marking, and preparation of loads of upcoming stuff including the Palaeoceanography practical. I was working rather hard! I did go climbing on Monday, but on Tuesday I worked late again, and on Wednesday I had hoped to go on an unexpected Wednesday underground trip, but ended up still working late, and then going home not to relax but to bake these bloody cakes.

I'm not a keen baker! It's a sense of duty that makes me do this. And I don't want to keep going so I openly hope I get knocked out in the first round. Last year I didn't. This year I probably would, as I was tired and wanted to go to bed and couldn't be asked to make much of an effort. I decided to bake apple pie as I can do that off by heart. It would also be easy shopping; I had flour, sugar, baking powder and and cinnamon so all I needed to buy was apples, eggs and butter. I thought I had raisins but I didn't, so I used cranberries. And I forgot the baking powder. And I got the dough wrong; it was crumbly. And I couldn't be asked to brush egg on top to make it look good.

I ended up in bed too late! And the day after I finished the marking (although not data entry and writing a feedback document) and then went up to our dig. The next morning I fired up the oven again as apple pie is nicer when warm. Then I brought it in, in a towel.

All the time I forgot to take a picture. And by the time I thought of it it had been eaten. Oh dear! But trust me: the pie was crumbly and fell apart. I had not added sugar to the Bramley apples and it was all a bit tangy. The cranberry worked well! Its rival was apricot-marzipan cake. I don't really like marzipan but it was very good! But mine was warm. That was appreciated.

Then the email came. It was a draw! We were both through! Blimy that didn't work out. I have to go again. I hope not any time soon! 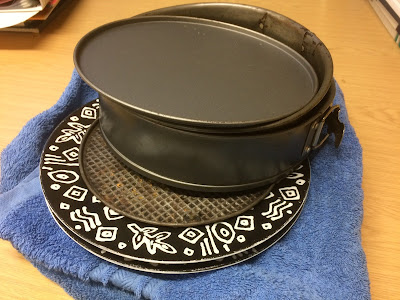