I tend to have lunch with a bunch of nice PhD students. One of them is a Chinese woman called Jingnan. She had been working really hard in the recent months (years) and had finished the write-up. She did her viva when I had Monique visiting so I wasn't there to congratulate her when she came out. But I got a chance to redeem myself!

When I was back in the office she came knocking. She  said she had been given revisions to do, and she had to do them fast. She had to go back to China soon, and start her post-PhD job! But she had been told her English wasn't good enough. Would I be willing to proof-read and correct a chapter? And I was! It's not easy though; I'm not at all an expert in the subject material so sometimes I'm just not sure what she's saying. She's a physical oceanographer who calculates all sorts of processes in Matlab. I only get one chapter so I don't know what the entire thesis is about, but this chapter is basically about how wind and tide act on a water body in various states of stratification. Shear is part of that.

I wrestled through it on Saturday, and spontaneously left it at home on Monday. Tuesday I was in the field, but Wednesday I finally went through it with her. That went well! And there were some sentences I just didn't understand due to a combination of Chinese sentence stucture and my lack of understanding of physical oceanography. But she explained all! And we were both happy with the result. I hope it'll be a thesis she is proud of! 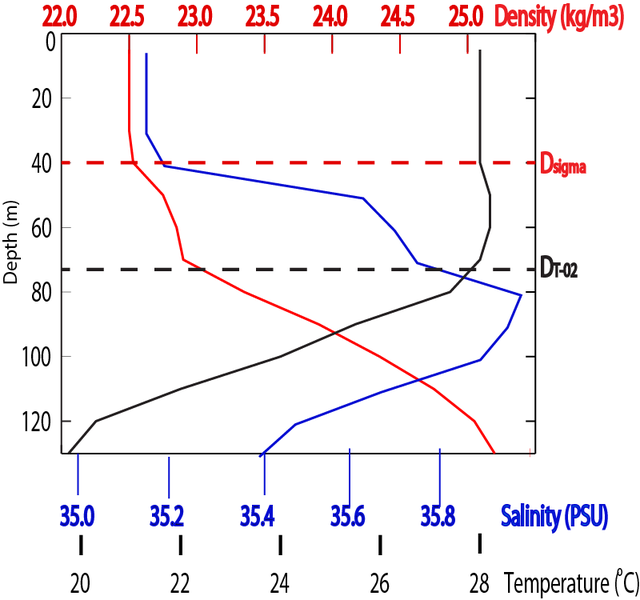 Graph of a stratified water mass - by Ehackert