When our local theatre/cinema opened, I was quite enthusiastic. But then I ended up not actually going there very much. Hardly at all. Except for work, that is; I regularly give lectures there. But that's different.

I had been to see a few films. That's nice! But it's a theatre too. I go see theatre even less than films. I had intended to see a Welsh language play but couldn't, as I was too busy visiting the BGS at the time. But once my friend Marjan had lugged me to a performance by Nina Conti. That had been in Llandudno, but still. She tends to ask me if her husband Jaco can't join her. And he would be travelling again when Phill Jupitus would perform. I was happy to go with her! She saves me from complete culture fasting. 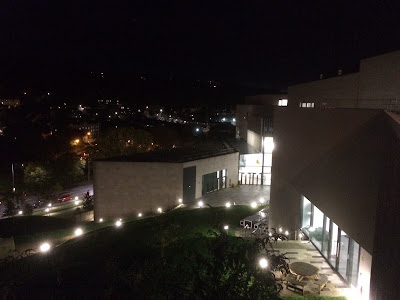 The Pontio building at night, seen from its top entrance

I had had a hectic day at work, and then my usual meet with my Welsh tutor, and then I had biked up. Marjan also had to celebrate a 50th birthday that day so we didn't travel up, or eat, together. We met in the foyer and went in. Phill Jupitus was already sitting on stage, with his back turned to the audience. He was just playing some records.

When it was eight o'clock he turned around, and announced the warm-up act: Porky the Poet. That's just Phill Jupitus wearing a hat. That's fine! He was quite good. He had a long and amusing poem about being the warm-up act for Madness. And some more nice observations. And some poems I didn't quite get. 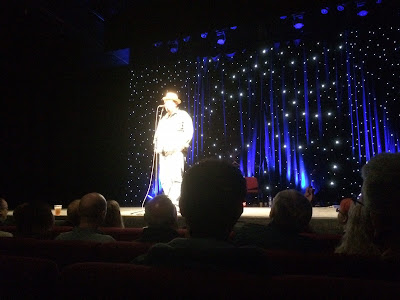 After a while he said it was the interval. He didn't go away, though; he just started to throw Tunnock's tea cakes (negerzoenen!) and biscuits into the audience. And handed out buttons. And posed for millions of selfies.

After a while he went on as himself. That involved a guitar and some songs. And more personal experiences. He spoke of fatherhood, both of infants and of adults; he spoke of his dislike of the likes of Trump, Farage and Hopkins. He took the piss of the North Welsh audience. He related how he and Mark Steel once were given a honorary doctorship at the university of Kent, and had a bit of an irreverent approach to that. He took the piss out of Coldplay and Eddie Izzard. And owls (?). He spoke of moving to Scotland and enjoying the heart attack-inducing food there. Some of it was easy; who in their right mind likes Trump, Farage or Hopkins? But it was rather entertaining altogether.

When he was done he played another record and did a little dance. I sort of felt like joining, but it already was bedtime and I still had to bike home. So Marjan and I just scooted. Who knows when I'll be in there again!