Unfinished business in the dig

The last time we had been in the Dig we had left it with a rather urgent task still to be undertaken. At the entrance, there was a big slab dangling precariously from the ceiling. That had to come down! In a controlled way. We didn't want it falling on our heads. Miles had ordered a pneumatic jack to push the thing down, but it had arrived on Thursday, not long after he had left the office to go digging. Bummer!

As he had been away and we hadn't dug for a while, we could only have a second try now. We divided the constituent parts of the jack into our bags and went down. I was down first; I was curious to see if we actually still needed the thing! I walked straight to the entrance of the dig and immediately saw that the dangerous-looking slabs were not there anymore. Well, that saves us bringing them down! And a bit of a pity I didn't get to see the new toy at work but maybe there'll be another time.

I had been worried the slabs coming down would also bring down a vertical rock that somehow managed to lean against them. It was still standing! And the whole ceiling was gone except one tiny pillar of rock, probably kept in place by the pressure. Very decorative! And dainty. 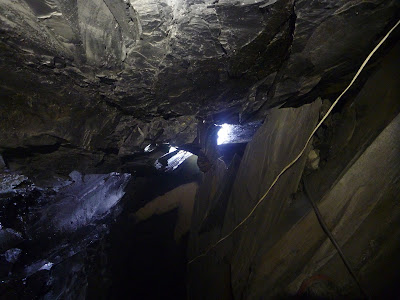 The specific pillar. back-lit by Miles

This didn't mean work was done. We still had two left-over charges in the passage along the ceiling! We might as well set these off. I went up the passage. I was a bit nervous about one rock in it, so when I went up I made sure not to touch it. When I was above it I had to bring some rubble from an explosion down. A smallish rock fell on the rock in question, and it crashed down. I think it was a good idea I had avoided it on the way up!

There was more to do. Both firing cables had been damaged and we only had one knife to sort them out. I left it for Miles (who was dealing with the thicker wire) so I was doing my normal wire-stripping-with-slate-trick. But then Miles mentioned the slabs that had come down were still moving; he wanted to sort that out, with me on the other side of them. I came back.

While Miles was manipulating the big rocks down I went for a leak. I could hear the ominous sounds of the rock-moving from quite a distance! But he sorted it. And we could proceed. I went back up, connected the first charge, and we blasted it. Success! Then it was time for coffee. We also did the other one but time was running out so I didn't even go to see if it had been a success. The first one clearly had!

We still have a lot of tidying to do in there. Maybe next time we can actually push a bit further ahead again!