It's nice to make progress in the dig, but it's also nice to just go on a scamper with the Thursdaynighters. I hadn't in a while, but Miles would be away for a bit, so I would show my face again. They had picked a mine I had only been in in 2014, so I was glad to get to see it again!

Beforehand there was a bit of a tense discussion with David; would we go in one or two cars? For both of us, it was a demanding week; for me, that is a cue to make sure I get my sleep. For him, it is a cue to hang out with the Thursdaynighters as much as he can. He wanted to go for a pizza afterwards, but he knew I wouldn't appreciate that. So what to do? I decided to jump into his car anyway. A bit silly to want to reconnect with the TN and then cutting out two hours of socialising. But it would get difficult. If you want to piss me off, quite easy options are coming between me and my sleep, or me and my drinking water. So we'd see what would happen...

We set off, with Paul in the back. We got to the meeting point where we met only Mick and Jason; nobody else could make it. We changed and walked up. It's not far!

We walked in. I didn't quite remember it all. There was a side passage I had forgot about, but once we got into it it started dawning on me I had been there before. Oh well! We continued making our way in. It was wetter than the previous time! It came up to my breastbone. Cold! But we got there. We had to help Mick over the dam, and soon we were in the chamber with the drum I remembered. 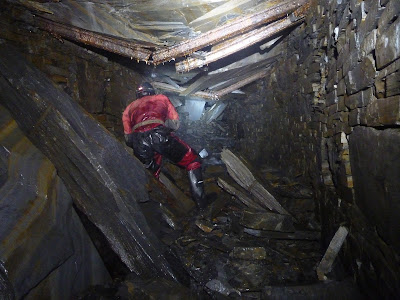 Jason in the somewhat iffy side passage

From there we went on to explore a bit more. At the junction we had only found after a while the previous time, we now walked straight into the passage that held a lot more stuff. We even found a passage we had not noticed the previous time. It went! And went. And went. We saw lots of passages and chambers, and clambered up countless scree slopes, and found many chamberes that went further than our lights reached, and which felt close to the surface. At one point I had seen a stacked wall with David; from it, you could see another passage. Paul and I climbed up yet another waste tip to see if we could find it. We did! It lead to yet another scree slope you could climb onto. And walk out into fresh air! Interesting. 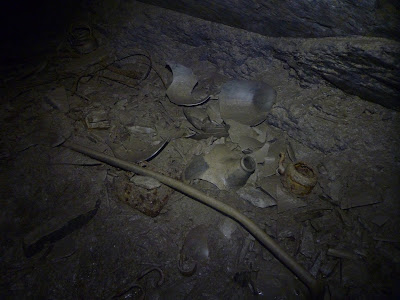 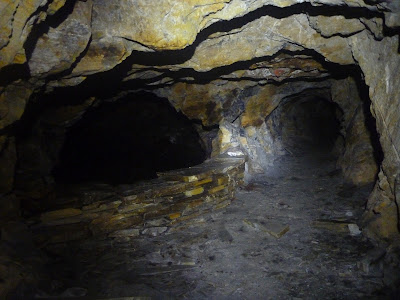 The stacked wall I saw with David 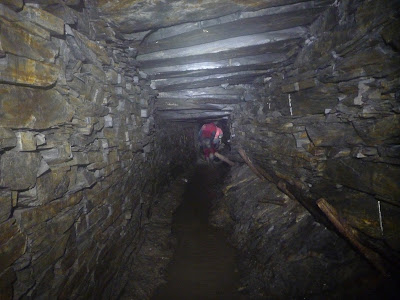 A passage through a waste tip; notice the sturdy ceiling

At some point we came to a collapse beyond which I had been the previous time. Jason was keen to explore beyond, but Mick was seizing up so he didn't want to. Paul and I volunteered to stay with him. I figured I should eat and drink some; if I would get that over with now I wouldn't have to spend time on it at home, and could be in bed quicker. But one of the reasons why Mick was seizing up was that he was cold; David and Jason did not reappear and Mick wanted to go out. Paul went with him. I stayed to let the others know. I figured they'd be back soon. They weren't.

I waited for a bit, and then decided to go and find them. I clambered over two collapses, and checked a side passage they surely weren't in. Then I went on. No sign of them! Then I came to a junction. Oh dear. It went both ways. If I would explore one direction, they would sure appear out of the other, and we would miss each other. What could I do? I toook two pictures and then decided to go back to where I had been waiting initially, but to have a leak along the way. I didn't want to be in full view, but neither did I want to be so hidden they would pass me unnoticed. I found a sticky-uppy stone and decided that would do as a shelter. 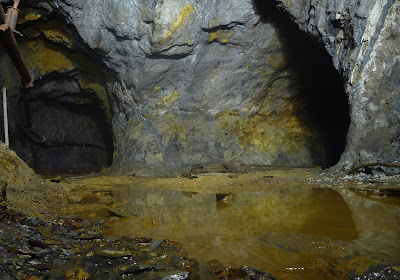 Of course I heard voices as soon as I sat there in pretty much nothing. Oh well! These men have seen worse. At least they now were back. We made our way back! David suggested we go out the dry way; up a scree slope and out. That would be a lot dryer than the adit. We went for it.

We got out and David mentioned he was just guessing where we had to go next. That worried me! I did not want to get lost now. But we found the way down, and back to the cars. Good! We changed and went to Mick's. Mick had taken Paul home.

We brought Paul his dry clothes (which had been in David's car) and sat down for a tea. I had a quick shower; yet something else I then didn't have to do at home! This way David could eat cake with the others while I kept the damage limited.

By the time we went home it wasn't even that late. Success! We forgot to pick my car up on the way back but that didn't matter very much.

It had been a bit of a tense evening; I had been a bit miffed when David and Jason stayed away so long when they knew they left a cold Mick behind, and I didn't like the thought of not knowing the way back to the cars from our alternative way out. But in the end it all worked out well. I don't think I've ever been in bed so quickly after coming home from an underground trip! And the next day I could work at full speed. Which was needed!