It wasn't until july I would get a good outdoor climb in! It's clearly not my year, climbing-wise. The first attempt at Holyhead Mountain in May didn't really involve anything that counted as actual climbing. But now we would go to Bus Stop Quarry and get some stuff done!

I hitched a ride with Eifion; at the quarry we met Mags and Sioned. Soon also Eirian and Ika appeared. Even later Lydia, and a lady I didn't know called Donna, appeared too.

I was impatient as usual and got into my harness rather quickly. Let's get some ropes up! I headed for an easy one; Mud slide slim/Ferrero Roche. It looked feasible and I hadn't done it before. Ika belayed me. First rope up. I was probably one of the few willing to lead, so I better get on with it!

When I came down I saw Eifion and Donna were faffing higher up. The others were staring at their phones. OK; let's do another easy one. I think the next is called Jagged Face. Almost a scramble. Oh well! Two ropes up.

No other ropes were up yet (Eifion and Donna had started to do stuff with an actual rope, though) so we proceedeed to First Stop, which I had done before. I got that one up too! Three ropes sorted. Time to have a look at what Eifion and Donna had done. 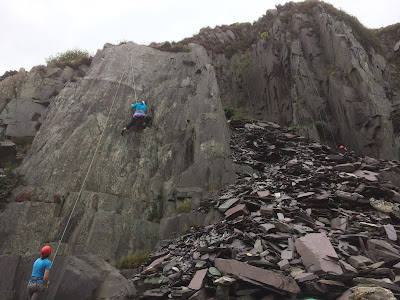 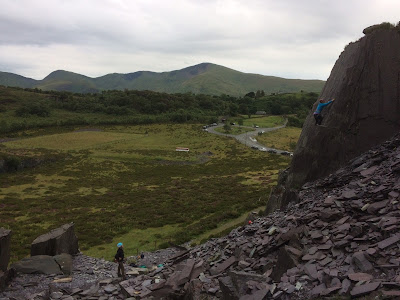 View on the actual bus stop

They had rigged a pitch from the top. Aha! That is better. Then you can do climbs that are too difficult to lead. I think it was Solstice Direct. I got to give it a go! And I found it hard. There is a section where all you have is the edge of a slab; the space between that and the rock face is so narrow you fear for your fingers. And the rock around is really, really polished, so your shoes just slide around on it. But with some dumb force I got past the difficult bits. Success!

By then Eifion and Donna had also rigged the neighbour; Equinox direct. That one was easier. I watched Donna and Eifion climb it and got a chance to do it myself after that. It was nice! 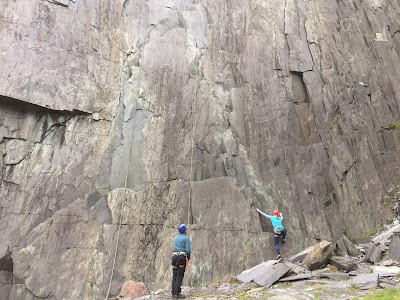 The midges had already been annoying when we arrived, but they were awful now. Time to start packing up! Eifion had a go at Solstice Direct while Ika and I started de-rigging the pitches we had earlier put up. When these were down I went to the top of the orbital pitches; we couldn't de-rig them yet! Lydia was about to give Equinox Direct a try. I just watched her go up (and down again) and started de-rigging. Time to get out of here!

When we got to the cars Mags mentioned she should try to find the club's clip stick. For when Margot isn't there, she said. Oh dear. I felt appreciated for rigging three pitches in not much time but this made things look a bit bleak. Am I just a clip stick that walks around now? Oh dear...
Posted by Margot at 09:13