Show my tutor the mine

In April 2014 I moved to Wales. I immediately started learning Welsh. And that September I started conversation practice with my tutor Jenny. That first day we already spoke about mine exploration. I think it was mentioned pretty much every session we've done since. And since the start of the digs, it was Cwm that got most of the attention. One day I showed her the maps. And she got a bit curious. It was time to show her!

We decided July would be a good time. When I got back from Laugharne we started organising it for real. We picked Saturday the 15th for it. She would bring her daughter (one of several), her son-in-law and her grandson. I had met all except the son-in-law before. And from the Thursdaynighters, Phil was up for it. And Edwyn and Jason perhaps. I really wanted at least one; you should never have some newbies in there with only one 'guide'. But with Phil for sure we were sorted!

David wasn't keen; he muttered about having to speak Welsh. Jenny doesn't speak English to me. Her daughter and grandson are fluent too. Her son-in-law isn't, so some English had to be spoken, but I wanted to keep that limited. This would be a great day for practice! And I had made it clear that was my intention. Hence David's hesitation. And I thought him not being there would make things easier; because of earlier experiences I am not comfortable speaking Welsh with him. So in a way him not coming was a good thing; but on the other hand, I figures that if this opportunity wouldn't remedy that issue it probably never would get remedied. Oh well.

Anyway. I borrowed kit from Miles (his harnesses with cowstails are made for his routes; 'standard' cowstails are a lot shorter, and way too short for Go Below fun. We noticed that several times before when trying out Miles' routes! (Like the recent one, but also a long, long time ago; my first time in Cwm, to be precise) I had made sure to borrow one for myself!

Jenny picked me up from home. That would save her navigating, me driving, and allowed me to have two hours more of Welsh practice. Excellent!

We got to the Lakeside Cafe early. We ordered coffee and sat down to wait for the others. Soon we were complete! We drove to the parking lot and got kitted up. A proper Go Below group, featuring one of the guides I know, walked past. Nice! We soon followed.

I thought we'd first go see the bridge, and take it from there. That worked fine! Jac, the child, was a bit nervous about the bridge (he told me not to shine my strong torch down as then he could see the gaping void below) but got onto it without issues. Then he thought it was cool! And from then on, we had him play on all kinds of fun Cwm has to offer. He did everything! And so did the others. Ben, the son in-law, had actually been a cave leader, so he was perfectly comfortable with all of it. Jenny and Helen were new to this, but aren't the fearful kinds. So all went well! Sometimes Jac needed some help clipping or unclipping because he couldn't reach with his as yet short arms, and sometimes steps were a bit too big, but he was fine. It was a great day! At one moment we needed to squeeze in a bit of a corner as an official group came past, and they have priority; having to wait for them to get past was a bit trying for Jac's patience, but all was well. I think he's spoiled now!

Phil wanted to be home at a reasonable time so we made sure to come out at two-ish. We did the obligatory picture at the entrance, and then we walked down, in the rain. I soon saw there was a light in the Manager's office; Miles was at work there. That was handy! Not only could we say hello; we could also give him back the stuff I had borrowed. And we could admire the progress being made in the restoration of the building.

We went for a cup of tea with bara brith in the cafe to finish the day. I think it has been a success! And now Jenny will be much better to visualise the things I talk about. Maybe I should show her the dig one day if she wants to! 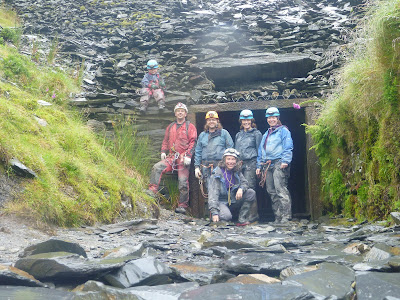