Every year there is a family gathering of my father's side of the family. The family is: my dad, his two brothers, and their spouses and offspring. Not a very big family, and we're never complete (of our generation of seven, three live abroad, and aside from logistic issues; not everybody gets along), but it is enough to make it special. I skipped many of these gatherings on account of living abroad, but I have changed my ways and now I try to be there every year. Two years ago, we all went paddling along the Meuse; last year, we went geocaching. This year we would just potter around in a nature reserve near where my dad lives. 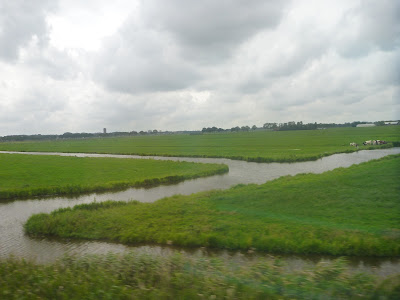 The Netherlands seen from the train

When I booked my trip I knew I had one day already filled with the family gathering; I then added a day with friends in Amsterdam, and a day with a friend who lives in Hoorn. The rest of the time would be for my mother. Sorted!

Getting to the Netherlands was a bit of a faff; there was some malfunction in Schiphol which made getting through customs a waiting game. But once I was through all was well!

The day in Amsterdam was rather quiet. Just some friends and some food and drink! Does one need more?

The family day went well too. The weather held, so we were quite happy sitting among the wildflowers, drinking coffee or wine, and occasionally engaging in games. We weren't complete as one cousin who tends to show up was ill, but we had a new addition to the family; my cousin Bart showed off his three months old daughter. She's the only one of the next generation with our family name! 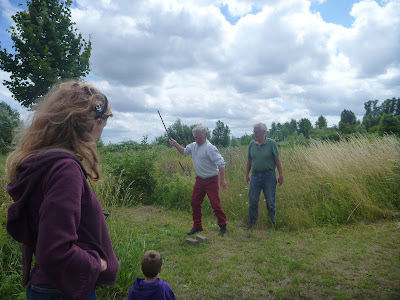 Silly games at the family day; my uncle Karel bats a piece of wood away 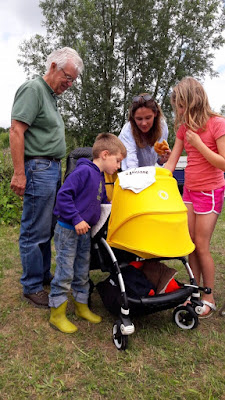 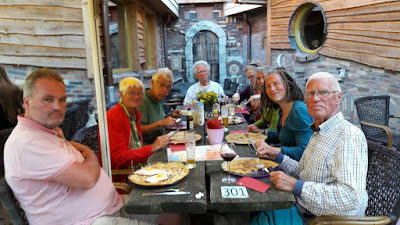 Eating pancakes at the end of the day. Pic by the waiter on Petra's phone

The next day I went to Hoorn to see Monique. That was a quiet day too! You would almost say me and those I hang out with are all old and dull. Suits me! I regretted not bringing a camera when we walked the dog, as the area is one of those really Dutch ones with the canal above the fields, and reeds and cows everywhere. Nice! But no evidence.

With my mother I did the usual amount of drinking coffee and wine, and the usual trip to the cheese shop. It was lovely! 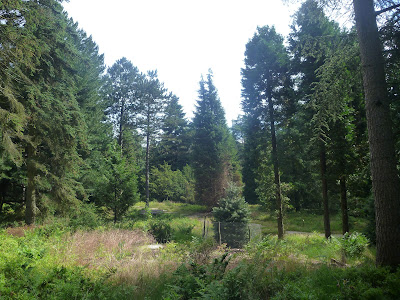 I went for a run too; I ran to the local Pinetum 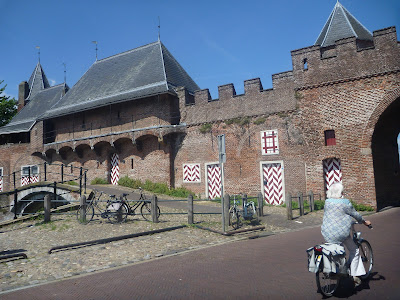 I often take a picture of the Koppelpoort from the other side (like last time); this time I caught the inside (and my mother biking past)

Did anything Earth-shattering happen? No! But was it a good visit? Absolutely. When next? No idea!
Posted by Margot at 12:04