Old-fashioned amounts of progress in the dig


We had reached the ceiling, and we would have a long day to go and try to follow it! Miles could get to the dig early, and I figured I could too. I have no holidays planned (except for the visit of my sister and father), but all work and no play etc etc so I figured I could leave work early. And so I did!

It was not a particulalrly blazing day, but it was still too summery to walk up in caving kit so I walked up in my civilian outfit, expecting to change at the top and go in immediately. Things worked out differently! I expected to see Miles in the dig, but I found him at the entrance, looking a bit apologetic. Two blokes were in the mine, doing maintenance, and Miles wanted to be sure they were out safely before going in himself. So we had to wait! Slightly unfortunate as I was dressed to walking briskly uphill, and had in my bag only a full furry suit + caving uit ensemble, so I was woefully unequipped for sitting still at the surface. Additionally, one of the attractions of our dig was the absence of faff. And now? we were faffing anyway! Oh dear.

Fairly soon (but not before I was cold) the men appeared. All was well! We could proceed with our plan. When we got down to the dig I immediately shot up. I was keen to see how to proceed! I stuck my head up and decided that a certain rock would be the first to die. It was in the way! And I thought Miles should have a look too. I started by clearing out some loose rocks, to make the passage a bit more inviting.

Miles struggled to get to the ceiling, but he agreed it looked promising, and that the rock I had singled out should go. Time to make that happen! Miles handed me the drill and I set to work. I tackled the rock in question, but while I was at it anyway, I also attacked the edges of two very large rocks; one that Miles had struggled to get past, and one that I figured he wouldn't be able to get past at all. When all was set it was time to have a drink. And a sarnie! I was getting hungry.

After blasting I went up to see if it had worked. And it had! Time to clear out the rubbish. And a big rock that I realised was a bit menacingly pendant above the passage. That needed some persuasion by breaker. And the rock that had been in the way had split, but there were rather big rocks leaning on it and the whole thing threatened to slide down, in the direction of where I would be. Oh dear. I asked Miles to stay within earshot while I tried to make that situation evolve without incident. And I managed to!

With all that stuff out of the way I could see the way on. It looked like I could fit through already, but only just, and I was somewhere Miles couldn't get to me, so I shouldn't take silly risks. It was better to get rid of one more rock that was still in the way, and then go through. And so we did! 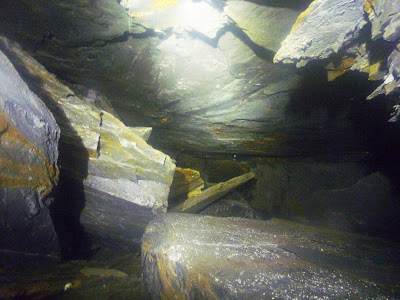 What I saw when I first stuck my head through

That last rock gave in to our persuasion, so I scampered past. I could see meters ahead! And the passage was wide enough to go all that way. I looked out for any indication of how far I had come, but I saw none. Most of the time I was following the top right corner of the chamber so at least I knew I wasn't veering off course. At some point I could go to the left, as there was a largish space. Good! It is always nice to have a space you can pass each other, or drop some kit, or whatever. Just sit upright! A next time I could go and explore a bit more thoroughly. Having ended up this high in the chamber should make progress rather straightforward! We might be out of the rubble in no more than a few sessions more...
Posted by Margot at 09:20