Another night at the ladder

Sometimes series of trips to the same place are quite nice. You get to have a proper explore! We had been in the same area of the mine now for a fair number of times. It started out as an add-on to an explore I had wanted to do, and then we had gone back once to find another way back out, and again to scale a level higher up from the previous time. Now we would go back yet again; we hadn't really decided what we would do, but we had one other traverse to rig in order to get into another tunnel, one level to scramble down into, and two to clamber up using our ladder. We probably wouldn't manage to do all that we could make a start.

In the parking lot we decided to not bring the drill; that saves weight. We would have enough to do without. When I was ready to walk up I did; I found Miles and Pete in the Manager's office. Pete had done a day of exciting work on a Go Below project. We would later see the results! Miles would come with us. He hadn't been to this corner of the mine in yonks.

The others appeared too; most had not seen the manager's office from the inside for a fair while. Its restoration is in full swing! All were impressed. But then we went in, and down. I felt a bit odd; my normal lamp had been damaged the previous time I had been underground, and I had sent it back to the man who had made it. My spare lamp was very weak and I wasn't used to not being able to see. Especially when going to such big spaces! But one makes do.

The first stop was a bridge Miles and Pete and several others of Go Below were building. We were impressed again! We may soon see it finished. But for now we moved on. We got to near our goal, and David offered to show one of the newer chaps, who had not seen it before, our drill. The rest started our way up the two slabs.

I was the first one up, so I could now have a look at David's traverse, which he had rigged last time. I hadn't awaited its completion as I had been really wet and cold. I was impressed! I had a look in the level it gave access too. When Miles appeared we scrambled down to have a look. You couldn't go anywhere from there, but it was nice to check out! 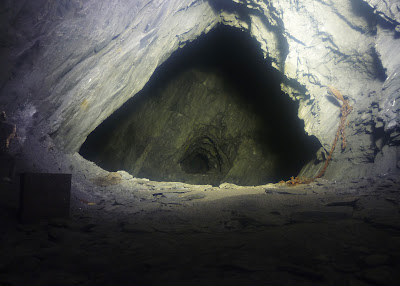 The level from which you can now go around the corner to the next shelf; you can't yet go into the next level you can see in the distance

When we got back the others were having a tea break so we joined in. After that we started our way down; Miles went home, and some of the other men lugged the ladder along the traverse on the level below to one chamber they wanted to scale. They found bolts, so we decided to check that out some other day when we had a rope, and time to rig the bolts. We left it for now! We made our way all the way down and then back out.

It had been a nice evening but I hope to be back in the dig next time! It's nice to see parts of the mine I hadn't seen before, but gaining actual new ground is even more exciting.
Posted by Margot at 09:29