I hadn't done a race in six months! I had tried to; I had registered for the Anglesey half marathon but then the snow hike came in between. So when a nice and scenic race came up in late May I thought I should seize the opportunity. It was the Snowdonia Half Marathon; a bit of a grand name for a race that skirted the outer borders of the national park, but hey, these people want to sell, so you can imagine a grand name helps. The route looked nice!

The forecast kept changing. From some rain to a lot of rain to no rain back to some rain. Oh well! I drove there in nice weather, parked, and got my number. Then I just sat underneath a tree until the race would start. A few minutes before it did it started raining rather heavily! Oh dear. 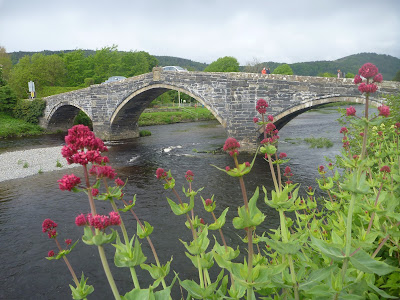 The scenic bridge of Llanrwst 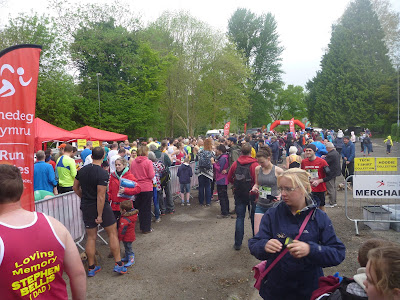 At the start, just before the race

We set off. The race started rather steeply uphill! I took it easy. I did not want to rush anything. I had never run such a vertical half marathon on the road. And even a rather flat one can be gruelling if you run too fast.

It kept raining, but not annoyingly hard. And the route was nice. We started on small country roads I didn't know.After a while we came to Llyn Geirionydd, which is next to one of "our" mines, and along which I had walked with both my sister and the swamp hikers. I got a bit hungry and ate a gel I had inherited from Gordy. I trust that brings luck! From there we went uphill again, to Llyn Crafnant, which I had also done with both my sister and the swamp hikers. There, briefly, the route went both ways on one road, so I saw the first three runners blast past. When I got there the second time I saw the stragglers struggle on. 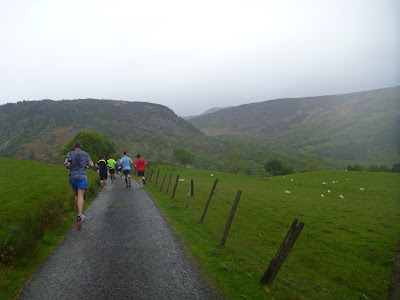 On the way to Llyn Geirionydd By about 10 miles I developed a stitch. That's always annoying! But what can you do. I kept running. Soon I reached Trefriw. I knew that right behind it was the infamous hill of the route! You would get an extra medal if you managed to run up all the way. I didn't intend to; I thought walking it might give me an opportunity to get rid of the stitch. But when I slowed down to cope with the steepness I felt it subside anyway! Good! So I kept going. Around me, pretty much everyone was walking. I could do this!

I got to the top. From there it would be pretty much all the way down. Some of it went rather steep. I'm not good with that! Mildly downhill is nice; gravity does all the work. But I'm not one to thuder, out of control, down a steep road. Oh well! 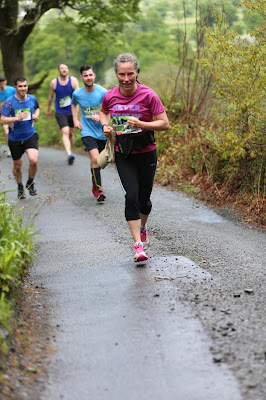 I looked at my watch. Finishing within two hours looked possible! That would be nice. I normally run half marathons way within that boundary, but as said, this was barely a normal half marathon. Two hours would be great!

I had some energy left to leg it on the final, flat stretch. When I got to the finish I saw it was about eight seconds beyond the two hour mark. But I had started at the back of the pack; I probably came over the starting line more than eight seconds after the signal! So I probably made it! I high-fived the blokes in front and behind me and collected my T-shirt and medal. Medals! I had deserved two! Rather spiffing. 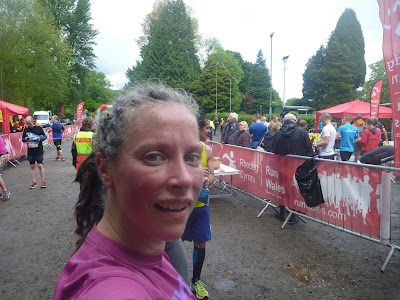 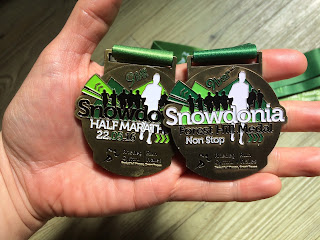 I got back to the car and drove off. Along the way I remembered I quite often end up with a dehydration headache after a race, so I parked somewhere to drink a flask of tea. I knew I would probably get distracted by practical matters and postpone drinking. Back home I checked whether the results were in yet. They weren't! I would have to exercise patience...