Climbing, caving, rescuing: all the same

When I came to Wales, I found a caving club through the recommendation of a lady from the North Wales Caving Club. That club operates a bit too far east for me, but she pointed me in the direction of the Thursdaynighters. She is also a member of the regional cave rescue team. I ended up in that too. Through the Thursdaynighters, or more specifically through Phil, I then got introduced to Clwb Mynydda Mon, the club with which I mainly climb but also hike.

Then one of the climbers, Ika, came along on a trip with the Thursdaynighters. Then Eifion did the same. Then Edwyn first showed up at a cave rescue session, after already having expressed interest in the climbing club. As he hadn't been there on Thursday he hadn't met Eifion to discuss, but I had, and he was comfirmed welcome. 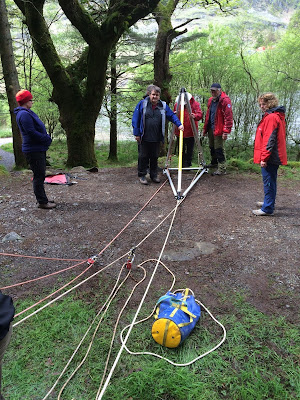 Playing with the Larkin Frame during the May cave rescue training

On Monday, at the quarry we'd climb in, I realised I had brought a barbecue but no lighter. I texted Edwyn to bring one if he showed up. It turned out he had forgot all about it, but that this reminded him!

We had come to Bus Stop Quarry, where many of the routes are trad, difficult or both. After a bit of searching we found one route that looked feasible. A small group split off to seek another. I then went off with Tony, who had appeared a bit later, to look for yet another route. You can't have too many people on one route; that's boring! But the guide book was incomplete and inaccurate and we mainly just scampered fruitlessly around. And while we were doing that I saw an Edwyn-like silhouette.He had shown up! I made sure to introduce him to Tony and Eifion. Then he helped us find a route, and when Tony and I started climbing it (I had not climbed anything yet, and Tony only a route that was too easy) he helped ligth the barbecue. I hope he joins us for real soon! 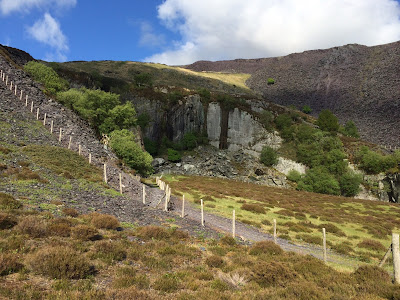 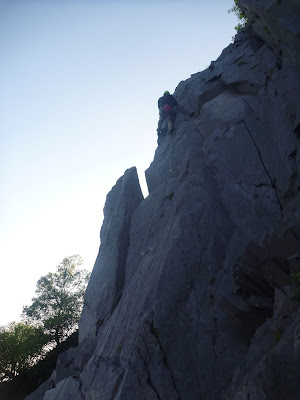 Simon on the diffucult bit 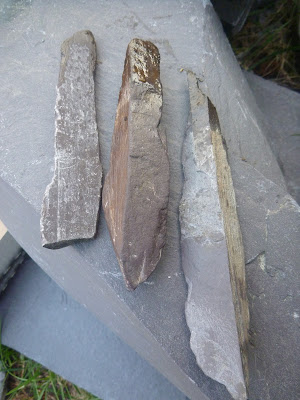 You're in Wales or you're not: the tongs used on the BBQ

The route that we picked looked easy, but would cause a déjà vu. I got to just underneath the top anchor but struggled to get to it. I felt rather exposed! In the end I gave up and asked Tony to finish it. And he struggled too! Just like the previous time. Then Simon gave it a go and managed. By then I was full-time busy with the barbecue. I wouldn't climb anything else that night. Next time I might get more done! And it will be someone else's BBQ turn.

Aside from the climbing, it's quite nice the climbers, cavers and rescuers blend so much! The climbers make excellent cavers as they are so agile and clambery; Edwyn is so agile and clambery it would be a waste for him not to climb, and the rescue team needs people of all sorts, but of course the agile and clambery would be extra useful. And I get to see nice people more often! And I have now developed the habit of speaking Welsh with Edwyn, and I already did with Eifion, so even my language skills benefit. Everybody wins...
Posted by Margot at 06:37