Snowdonia has many of these empty valleys, with maybe some sheep, and generally some remains of mining, and not much more. I can't get enough of those. One of the first I admired was the Croesor Valley, when I was visiting north Wales with the PCG. We walked along most of the valley to get to the entrance of Croesor. I was quite impressed by this silent valley (even though it has a road in it, and a tiny hydropower scheme) and all the scars in the landscape from the mining. I had been back a few times; David had once pointed out the mountain on the other side: Cnicht, and that it's a nice walk over its ridge.

Croesor is a fair drive. For undergroundy reasons we do it, but then we're car sharing. If I go walk a mountain in a weekend I tend to stay closer to home. But time is running out and the south is amazing too, and moreover, I want to take the swamphikers there this autumn, and it's good to scout ahead. So when another weekend approached with an amazing weather forecast I decided to do Cnicht. And walk back along the other side of the valley.

I set off early. There were only two other cars in the parking lot when I got there. I scampered off in the direction of the path to Cnicht; in a landscape like this you don't need to keep a map at hand. Walk along the road until you find the path to Cnicht and then just follow the ridge until you get to the top. Easy! I had decided I would walk to the top of the valley, to the remains of Rhosydd quarry, and decide there if I would go back over the old tramway, which I had walked before, or whether I would go back over Moelwyn Mawr, and if so, if I would add Moelwyn Bach to the trip. 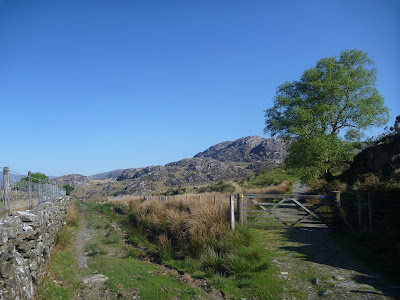 The clearly indicated start of the path 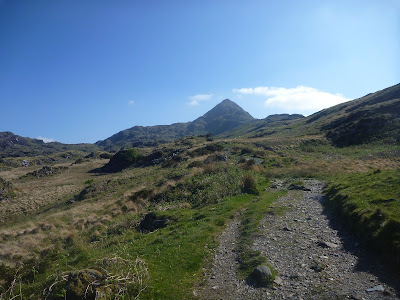 I barely saw anyone. A man came the other way from the peak of Cnicht. While climbing it I realised that when you're Dutch, you are at risk of being earwormed by "Sinterklaas" songs when you tackle a mountain like this. Weird!

When I reached the top I admired the amazing view. One of the things I saw was a small figurine on the lower peak beyond. When I pushed on I found this, and two other, figurines; three dapper walkers who were having a coffee a bit beyond the top. The top itself gave amazing views over the wide surroundings, including the spoil heaps of Croesor, Rhosydd and Cwmorthin. And probably a few more. The three people below the top were admiring it too. They were quite chatty and I joined them for a cup. Nice people! But when the coffee was consumed we went our separate ways again. I went on, to the path that would lead me to Rhosydd. 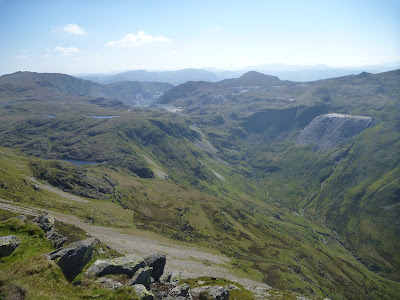 Amazing view from the top: the spoil heaps of (ltr) Cwmorthin, Rhosydd and Croesor all in view! 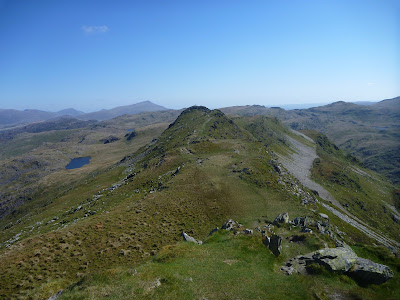 I quickly lost it. These paths in Snowdonia are not always there! Over rocks, through swamps, down streams and past industrial heritage I picked my own way to the distinct ruins of the Rhosydd buildings. It wasn't practical but the views were amazing. The Rhosydd ruins are quite something on their own. I had once gone up the incline rather than into the adit, after our wet adventure, so I knew where the path started. I went a bit up, and then decided it was time to ditch my jumper and the legs of my zip-off trousers. I also applied some sunscreen. Not enough, I would later find out! 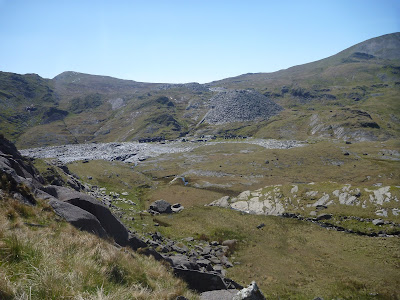 I decided to go over Moelwyn Mawr. The path could be seen from a distance. No navigation prizes here! And I figured the top of that mountain might make a good lunch spot. And so it did! After reaching the triangulation pylon I sought a place out of the wind. With a view on Moelwyn Bach, the sea and everything in between, I ate my sandwiches. A look on the map showed me that by enthusiastically scampering onto the Moelwyn Mawr ridge I had accidentally decided not to do Moelwyn Bach. That's OK; it was a fine walk as it was! 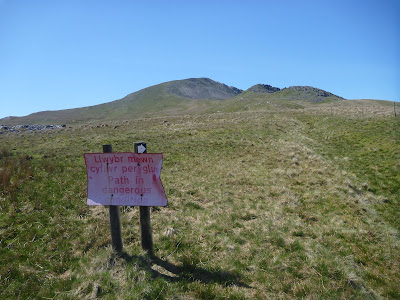 I never really found out what was so dangerous about it 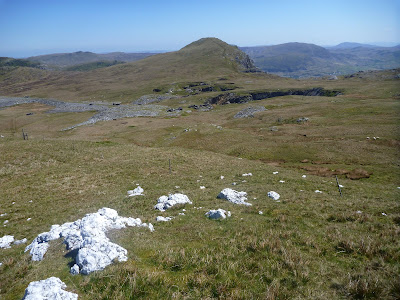 Twll Mawr, part of Rhosydd, in the landscape 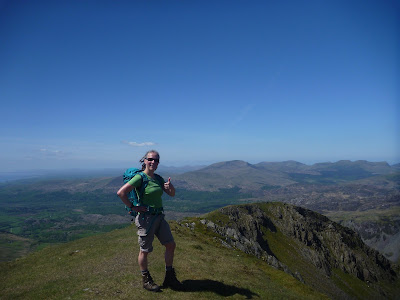 Me on the top

While I was eating a figure appeared. It was Janet, from the climbing club! That's funny. And she was followed by many others.

After my lunch I packed up again and went on. The map didn't show a path; there was one, anyway, but lower on the hill it seemed to vanish. I picked my own way. Trying not to scare any sheep any more than unavoidable I walked through the fields, until I got to the little country road I had had car trouble on only weeks before. That was only a stone's throw away from the parking lot. Loop fulfilled! 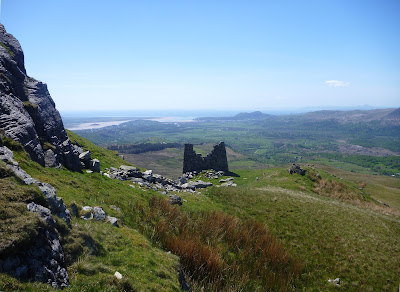 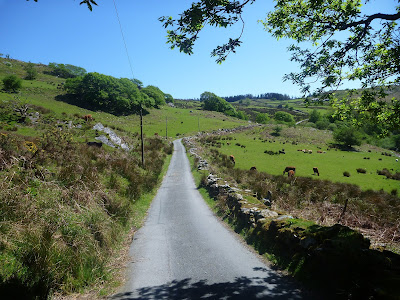 When I came home I realised I should have applied the sunscreen not only to my arms and legs, but also my head. Oh dear. Oh well; the next day I would go underground, so my skin could rest!