I felt good again, and the weather forecast was OK! I decided to head into the mountains. I had been reminded of the Watkin Path, one of the paths going to the summit of Snowdon, a lot recently, and I had reason to believe it was beautiful. There are between six starting points of official paths to Snowdon, by the way; I've only summited from one of them (via two different routes though), and have started from two more. I live straight North of it so had never got around to approaching from the south. But now I would. The closest I had come to the Watkin Path was running up to Bwlch Cwn Llan, from which you can see some of the path. I was struck by how pretty it was!

I started early, as the tourist season has started and parking lots fill up really quickly. It was raining; maybe that would keep the paths rather quiet. I started off on my own, but when the landscape opened up I started to see little dots of people on the path before me. And it was beautiful! The mountains were majestic, but adorned with the silenced remains of an industrial past. An incline here, a ruin of a building there. Lovely! 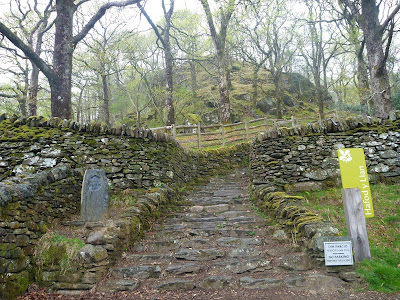 The glamourous start of the path 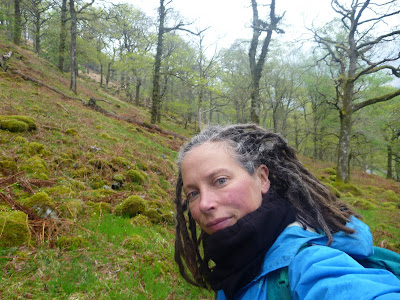 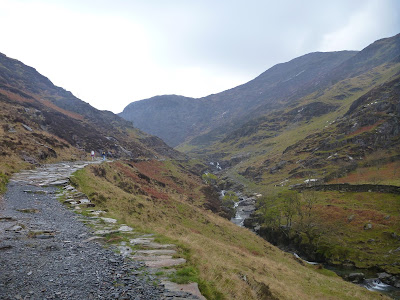 Out of the trees, into the valley

The path went past a spoil heap of an old, and small, slate mine. This was what had struck me from Bwlch Cwm Llan. It was great! But it was getting busier. I overtook quite some people. The landscape was very dreamy, as it was hazy, and vague ghost-like mountains were only just visible on the horizon. It was stunning but I couldn't capture it with my camera. 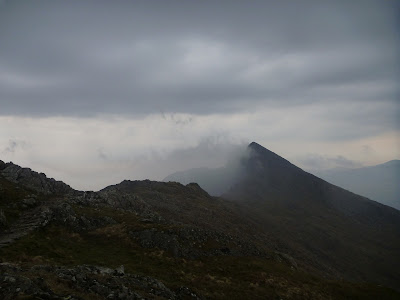 After not much more than two hours I was on top of my route. I did not intend to summit this time; I wanted to walk back via Clogwyn Du, and that way you don't have to. I did not see the point of scampering there and back only to end up where i had been before. I found a rock in the shape of an armchair and had a drink. It was raining again; I did not linger. I went south again; the route was a lot more well-trodden than I had imagined. OK with me! I was in it for the views, not the physical challenge. 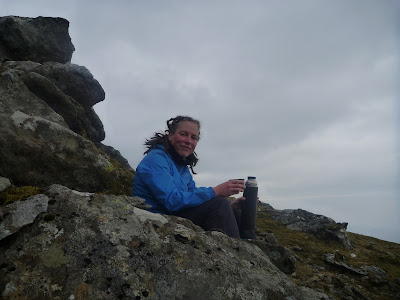 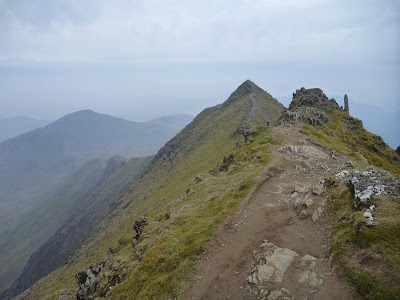 The way down flipped between sun and rain. It was warm! I was quite sweaty. When I got close to the slate quarries of Bwlch Cwm Llan I sat down for lunch. On the ridge I had sometimes stopped to listen to the silence, only broken by some birds, but not much later a helicopter had appeared, and it had hovered low over Lliwedd, and now it noisily hovered over Yr Aran. Not so paradisical, but these guys need training too. I bet that was what it was, anyway.

The view from Clogwyn Du 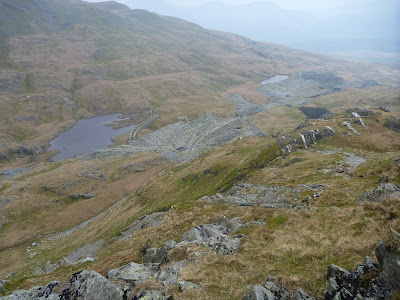 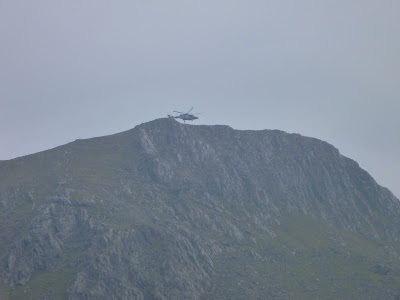 The helicopter above yr Aran

From the saddle I walked down the mountain flank, ending on an old quarry tramway. The path moved away from it, but I wanted to see the top of the incline I knew this would lead to, and which I had seen on the way up. In ended up descending the incline, following the old tramway to the next incline and descending that too, just because I could. Then I was as good as back to the car! And by now, of course, the parking lot was filled to the brim. On the way back I drove past an impressive amount of cars with parking tickets. Good to be reminded of the consequences of not being early enough! And I had managed my usual trick of a mountain hit-and-run before an afternoon free for chores... 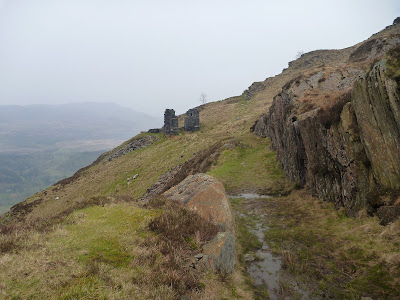 Approaching the top of th eincline with its drumhouse
Posted by Margot at 09:27