Back to the dig

Cwmorthin is big. Our dig is small. What often happens is that we go into Cwmorthin, either to go to our dig or to do something else, and that we then end up splitting up. Some going to our dig; some doing something else. I had been in the "something else" group for two trips, and had stayed at home for another. It was time I got back to the dig!

We had no other plans, but as said; the dig is small. Moreover, on the parking lot we were accosted by a couple who were looking for the Thursdaynighters. That's us! The man had seen on our forum we would be gathering there and then, and that all were welcome, so he had decided to join. I suppose his wife would go for a walk or something; it was a beautiful night. I don't think he had SRT stuff with him so couldn't go to our dig. We showed him where we would descend, and then we parted ways. Paul, who's not keen on SRT on any day, would lead the party of non-diggers.

We started to chuck the last scaff bars we had brought along into the chamber below; then we followed ourselves. The drop is ready rigged these days; I hadn't been down yet. I liked how it was done! And when down I started to ferry the scaff bars to where they would be needed.

The dig looked good. The men had started to make a triangular passage, protected by scaffolding. If we would backfill it, the risk of stuff falling down and crushing us would be quite reduced. But we first had to add some pipes. We set to work!

We had Phil that night; he's an engineer and doesn't quite dig through collapses for a living, but he's the closest we have. We measured some spaces we wanted to fit a pipe in, cut them to size on the spot, and put them in position. When we had a bit of a wall we started to back-fill it. That freed up some space too; a bit of a bottleneck for this dig! We are working in a small level, and putting whatever material you pull out of the dig somewhere can be trying.

I kept an eye on the time. We would meet the others at 10. And that was rapidly approaching! But when Phil and Don were done progressing the dig (I was mainly an assistant) David wanted to see what had been achieved. He took his time. And I didn't want to leave before I had seen it too! Then we left.

Coming up the pitch was a pleasure. It didn't even require a chest jammer! We were out in no time. And in the chamber we would meet the others we found Paul and Jay. Andy and Rich were allegedly scampering up the incline; I decided to go and have a look. I hadn't been myself!

When they saw me they started to come back down; they had got bored with waiting but clearly, the wait was over now. I had time to scamper to the top before I followed them down. When we got out the moon was out; I love that! I did my usual thing of switching off my light and hanging back; I love that valley in moonlight. And once back at the car it turned out we had a veritable overdose of cake; it would be Don's birthday the next day, and pretty much everybody had brought cake. We'll save some for next week! 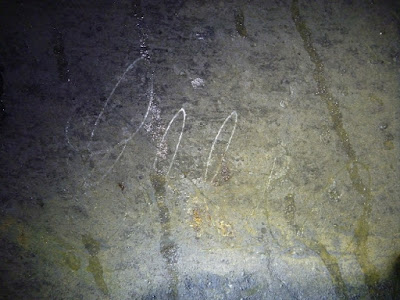 A miner had written his name on the ceiling: Ellis Jones (only Ellis on this pic). Not easy to photograph!
Posted by Margot at 08:52