We got to the crag and kitted up. I think I had established my reputation as impatient the week before. Nobody seemed to mind! I tried to be composed and wait for the right moment. I didn't have to wait too long. Simon started to lead a climb on the right; the climb on the left had been described as hard. I volunteered for leading the one on the right.

It went rather well. I got up quickly! Until I came to an overhang. There I just didn't manage to free up a hand to place a quickdraw. I didn't want to overdo things! I had Lydia lower me again. Eifion volunteered to finish the job. He started off, but before even reaching the first anchor he already decided he didn't like it one bit. We needed someone more daring! That left either Ika or Tony. In the end it was Tony who did the honours. And he struggled! Blimey if he struggles I am chanceless. But now at least it was rigged, and others could second it. 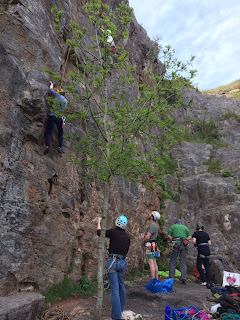 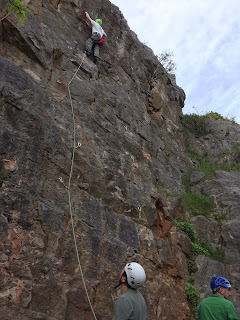 I did the next climb up, which was rigged. That was quite easy! I got to try one of the slightly harder ones too; I did get up it, but struggled at one point where flowstone (we were climbing on limestone this time) made any potential footholds very slippery. I was glad I wasn't trying to lead this one! Then it was a bit of a wait, alleviated by some barbecue activity, until the route furthest to the left became available. Tony lead it, and I tried to follow. Forget it! I couldn't get past the first obstacle.

By then the only route I hadn't done was the one I couldn't lead. But Lydia was by now keen to leave, and my stuff was still in her car (including my mountain of newly-bought kit). I didn't want to climb until she had left, so as not to keep her waiting. But everyone was already getting out of their stuff! Lydia said I should just do it and she'd wait; Eifion was still in his harness so he belayed me. I got to the point where I had struggled to lead. And now I couldn't even follow! After a few minutes of struggling I gave up. Well; I have still some challenge left there! Maybe I do better next time...
Posted by Margot at 21:00