Early December is not only time for Sinterklaas! It is also time for the YCC coming to Wales. It is always a bit of an awkward time it seems; all these things that need doing before the end of term. But they're such a lovely bunch so I would go anyway! And in spite of the awful weather I got there on time. I managed to park up (the hut they tend to stay in had an awkward approach) and I walked in. Matt immediately offered me a cup of tea! Typical. Before they got here some exchange of venue ideas had taken place via email and Facebook, but the decision had to be taken there and then.

I had suggested some of our more obscure venues. Someone else had suggested some others. One of the names mentioned was Rhiwbach, which we had visited twice in a row rather recently, so that meant I would remember the way. That helps! So that was chosen. And I know how to get to the hut where we were, and I know the way to Rhiwbach, but I don't know the way from the former to the latter. The trip there was already very epic! The landscape was entirely empty and blasted by the rain.

We parked up. Soon two of the GoBelow minibuses parked up too. The woman who guided the tourists addressed me; she warned me against going through if the water was too deep. We'd have to see! We walked up. We were there in no time. The YCC is not the Thursdaynighters! Soon we were in. We first got to the traverse, but we found Marty (of Belgrave fame) there with another group of tourists. We decided to leave them to it and go on, towards the traverse-with-drop. And into the incline with the waterfall in it. The lady from GoBelow had mentioned that this would be the moment to decide whether it was safe to go on. Fortunately, it looked like it was. All were very impressed by the amount of water that came down!

The incline which is the main throughfare 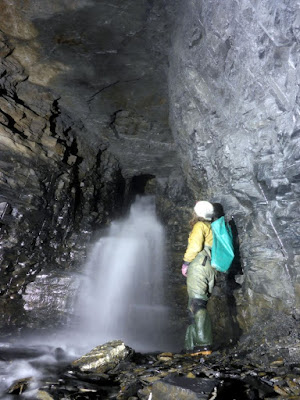 Me at the waterfall 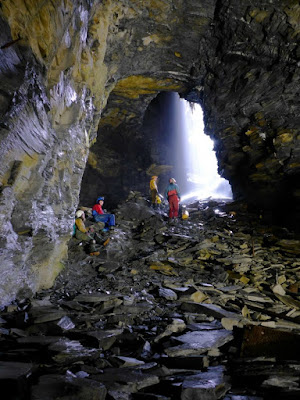 We could tell when we got to the exit the weather hadn't improved...
All pics by John


We went on and admired the jumper and the stitch drilling. I managed to find it! Not in one go but that's a detail. Then we went up to the level with the waterfall. It was rather swollen and nobody was keen to go up it. Oh well! That left us the level with the air shaft. It was still early when we came out. That's the YCC for you! But to our surprise, that was when things got exciting.

We came out in heavy rain. When we got out of the pit with the entrance in it we were almost bowled over by the wind. And there was water everywhere! The stream was enormous! It was epic. It was a bit tricky to walk down without falling over but we did our best.

It wasn't much of an extensive trip but now the YCC have seen this venue too. I hope next time I can show them Aberllyn! As it is I'm not sure enough of the route to the entrance and then back out. I have a mission! It's nice to show people venues they don't know yet. And there is much to see here! 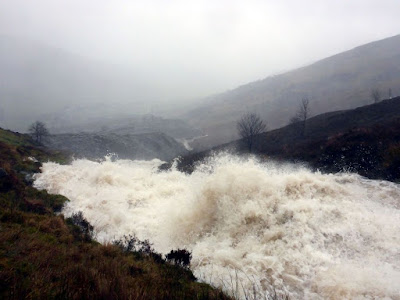 Believe me; the river doesn't always look like this...
Posted by Margot at 15:32