You can go into Cwmorthin many times and still see new bits. Some time ago we had gone to have a look at some out-of -the-way bit with original bootprints. Along the way, we came ast a pitch that gets you into what is known as the Lost World. This week, we would drop that pitch. And we would have Rich with us, who was buzzing with adrenaline, as this would be his first rope work.

Two more newbies joined us. For some reason, a trip to the Lost World attracts a lot of attention. Especially from people who couldn't go there unaided. We got Rich into a harness and off to the entrance we went.

Soon we reached the pitch, and rigged it. Edwyn was down in a jiffy. I wanted to stay up to help Rich down, but David thought he might be better equipped to do that. He suggested I may be too impatient. The suggestion alone! But Rich didn't care who would talk him down so I went ahead.

I kept an eye on the next person down, and took some pics of him doing it. Then I set off exploring. After exploring every tunnel I went back to see how the newbies were doing. This way I managed to see all there was to see. Finally, I saw Rich was coming doen. I stayed for suppoert! He was clearly nervous, and nervous people tend to make life harder on themselves. This abseil was not a free hang, but a rope-assisted walk down a stepped slab. And these slate slabs are often wet and slippery, and this awas no exception. And nervous people often tend to lean forward, while it is a lot easier if you lean back. 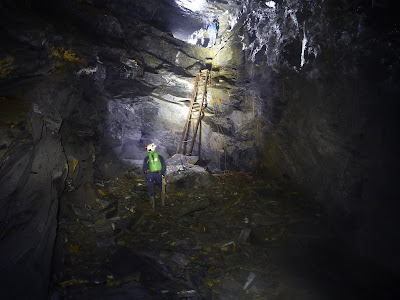 Andy coming down the pitch, watched by Edwyn


Rich lost his balance at some point, and rolled over. But he stayed calm! He was just wondering if he could abseil facing away from the wall. I figured the rope might not feed through through his descender, so I talked him back to facing the wall. And helped him down the last step. He was down!

He needed a fag. And when that need was sorted I dragged him along to see the sights. As this area is rarely visisted, it has lovely artifacts, and also more hob-nailed boot prints. Nice! 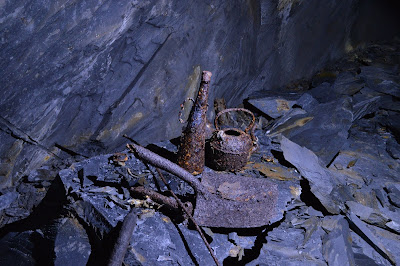 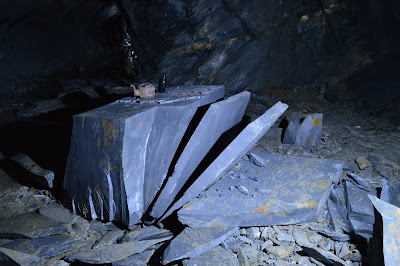 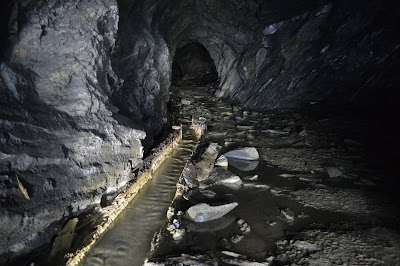 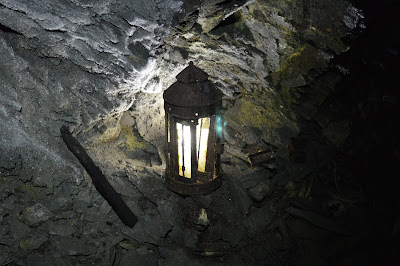 Some of the artifacts; all pictures by Andy.

Time was flying, though, so I hoped we'd soon go up again. I thought it might be a good idea if I go soon, and perch on a ledge, about halfway down. I could provide mental and physical support from there. And so I did! And then Rich was sent up. He struggled, sweated and swore, but he got there. The other newbies were a bit more restrained on the swearing, but equalled him on the other fronts. But finally, they all made it up without needing being pulled up by us! But by then the clock had struck midnight and we were still deep down inside.

Everyone who could leave left while David and I came up last, watched by Mick. We derigged and left too. All the newbies were very excited to have made it! I think we'll see all of them again. Altogether a good night, but we shouldn't make a habit of this. Sleep is necessary too! Next week we won't do any rope work. You can't be this extravagant every week!
Posted by Margot at 08:41