In all excitement with work, cars, birthdays and whatnot I almost forgot to announce on this blog that Bangor has a cinema cum theatre again: the Pontio building, which is both part of the university (mainly for the Arts faculty, but containing a big lecture theatre that will be used by whoever who needs it) and the town's cultural centre. Great! It's taken WAY too much time and money, and it's not finished yet but at least it's functioning. Inside you still run into fenced-off bits and workmen applying finishing touches, and that can be annoying (I don't like elevators but if the staircases are not released yet there is little choice), but the main thing is: we have access to culture now! I love it!

I went to see "Suffragette" with Marjan on the second day the building was in use (Dec 2nd) and it was nice. I look forward to doing more of this in the new year! Including a play in February! 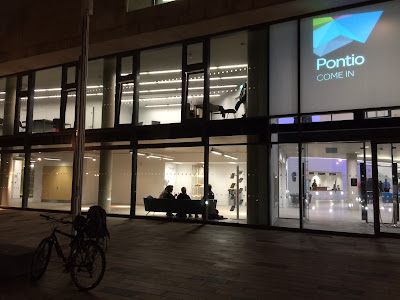 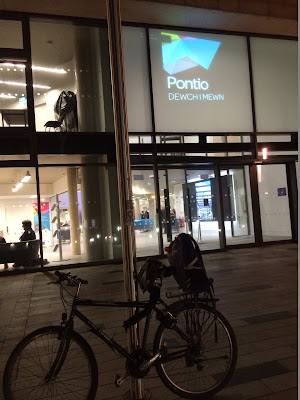 Notice the bilangual greeting, and notice the absence of bicycle racks!