I picked a day with storm and flood weather to try my new car for the first time. I suppose I had little choice; I was too busy during thew week, and on Saturday I had to get to the hut the YCC had rented, which was in SW Snowdonia. After I'd said goodbye to the old car I got into the new one. And I liked it!

It wasn't very damp (the car, that is; not the weather), the lights were good and the window wipers worked well. And it received BBC radio 4! I was happy. The weather was terrible but a car doesn't get blown over that quickly. There were big puddles on the road. I didn't worry about it. They got deeper. I started to worry about it.

At some point, I wondered if my car could cope. The water was so deep! You can't see quite how deep exactly but I could feel it. Up to the bumper! It would be a bit silly if I would manage to flood the engine the very first time I would ever take that car out! But I made it.

We decided to go to Rhiwbach, and we went in two vehicles. No need to bring mine! And there were puddles on the road, but nothing worrying. We had a nice trip. When we came out we had a long walk back to the cars. The rain was still horizontal, we were repeatedly almost blown over, and the stream near the path was a lethal torrent. Blimey! 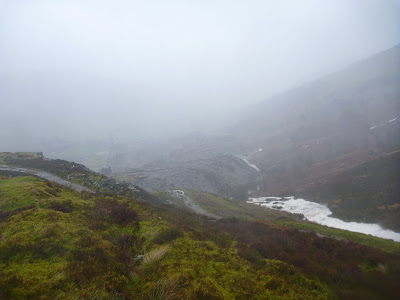 Picture taken on the way down from Rhiwbach

We made it back to the hut. It was still raining. I kept thinking about these floods on the road that would still be getting deeper. I was worried! I imagined myself stranded between floods and only having my soaking wet caving gear to keep me warm through the night. I had decided I'd head south on the way back, get to the main road at Porthmadog, and then follow that home. I figured that one would still be clear! And if the road was flooded before Porthmadog I would have to go back and sleep in the hut. I was welcome! But it wasn't needed. I got home without incident. Which I didn't take for granted! And I like that car!
Posted by Margot at 08:08