I tend not to celebrate my birthday. If you have your birthday in mid December you're pretty much done celebrating anything by the time you get to that date. Everybody plans Christmas activities in that period. If it falls on a Friday or Saturday then there undoubtedly already is a party planned on that day; if it's another day it's not a convenient day for a party anyway. (And if not: go underground!) But I like round numbers and I didn't want to not celebrate my 40th birthday. I wasn't sure how to go about it, though.

If I do a standard party at my house most of my friends would have to drive home as they live too far away. The ones that live close by are either Jaco and Marjan, or they are PhD students, and these tend to booze until dawn, and I don't want to do that. And I like outdoorsy things. When someone by sheer coincidence mentioned mountain huts I thought I had the answer. Get my hands on one of those, have people drive in, and let them spend the night! That way everybody could drink. And during the day we could go for a walk. And I would wake up to a beautiful view. I find that special! I got my hands on a list of huts and booked it for the night of 12-13 December, and told people to save the date. The most important bit was done!

The rest of the planning would have to be done later. It was hard to find the time, especially with a trip to Edinburgh getting in the way. But I decided the easiest thing to do for food was to cook a pile of pasta, and I wanted bacon pancakes for breakfast; for drinks I would ask people to cater for themselves. Regarding the day program the weather gods took control; the forecast was awful. It would have to be underground! And by the time that was clear almost everybody had dropped out; only David was left of the underground folks, and only Coleen was left from the Ocean Scientists. Coleen declared herself not a fan of tight spaces, so I thought of our default mine Cwmorthin. Sorted!

I was back from Edinburgh on Wednesday. On Thursday I was teaching all day, and then attended the Ocean Sciences Christmas Party (QED). On Friday I was teaching again until ~14:30. I decided to go home early, get my caving kit and my overnight bag ready for the next day, get into my car, drive to the hotel where I would have a Welsh practice with Jenny, received some firewood from Edwyn, drove to the hut to see what it was like, drove to the shop to buy stuff for dinner and breakfast, and got home tired. I still didn't feel festive but I knew it would be better once I was in the hut and things started to evolve. 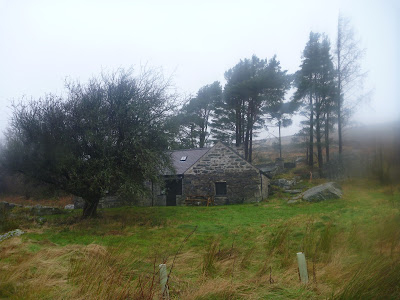 It took slightly longer still until I would feel festive; the next morning I woke up listening to the rain, and drove to the hut. Its parking place is a bit of a distance from the hut, and the rain was torrential. Ferrying the food and the firewood and my bag to the hut was enough to have me soaked. Unpleasant! But soon we would get into caving gear and then all would be different. While I was till ferrying, Coleen arrived. She helped. Then David arrived. Time to all pile into my car, drive to Blaenau, and have the festivities begin!
Posted by Margot at 16:47