We would go back on a Saturday to revisit the trip we'd done some two weeks earlier, which wasn't a great success as then we didn't know where the entrance was, and didn't have the required ropes. And there seemed to be a collapse. We decided to re-rig the pitches and drop them both. The last time we didn't have a rope for the second pitch so the only thing we could do was stare at the rusty anchors.

It was a busy time but I was feeling down after a hard week and decided (correctly) that a day underground would help. I hitched a ride from Phil. He was a bit worried we wouldn't fit, as he had another hitchhiker, and we all needed a fair amount of kit. I brought my rope, as I wasn't sure if we had that sorted yet, but he told me to leave that in my car as he said Brian would be bringing one, and Mick the other. OK then.

We drove to the meeting place; everyone was on time. Except Brian. Until we realised Phil had misremembered that Brian would be coming. So we didn't have Brian, and we only had one rope! Oh dear. But we did have some scraggy ends of rope, and the first pitch was rather short, so I figured we could do it.

We parked and got kitted. Then everyone ran off in the wrong direction again. Oh dear! This time I remembered where we had to go, and soon we were in, and at the top of the first pitch. I rigged it with a sling and three stubby pieces of rope. It worked! It was just long enough. I was down.

We then rigged the second pitch on the old anchors while Phil installed new anchors. For the second pitch we used two ropes, as the knot would be passed at a convenient point. I went down this one too! We didn't quite know how deep it was, so also not if this rope concoction would be enough. I went down rather carefully! I didn't know if the rope had a knot at the end so I could potentially kjust slide off the end. Not an attractive idea. But I was careful, and I came down with a few metres to spare. Nice! I shouted really loudly up that the rope was free (there was a bit of a waterfall coming down the pitch) had a look at the part of the level that went into the mountain. It ran dead rather soon. I sat down and had some lunch. It was almost 1PM! I figured we'd scout the other side together when everyone was down. 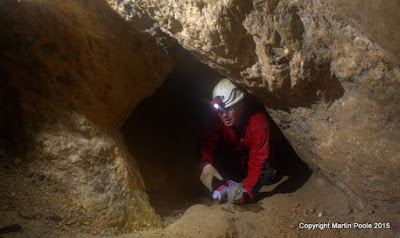 Phil armed with resin for re-bolting the pitches 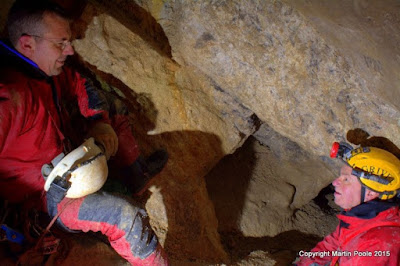 Male bonding with Phil and Mick 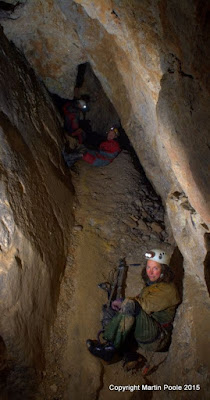 Waiting for people to come up. All pics evidently by Martin poole aka Marty

Then Jason came down, and Angela. Then I figured it was perhaps an idea to check if the way out actually went. It got wet very soon! It soon reached knickers level. Oh well. Onwards. Then it reached bra level. Oh well again. But then the water got so high and the ceiling so low I had to cock my head in order to keep my nose above the water. Not good! And I could hear the banging sound of the waves I was making slamming into the ceiling. Not good. I decided I didn't want to go any further. It sounded properly flooded to ceiling level!

I went back. Phil was coming down; I was hoping he could relay the message up to the people above, that it didn't go and that those not keen on prussicking all the way back up shouldn't go down. He decided to turn back on the rope instead and go and tell people. Works too!

As I was entirely soaked I requested being next in coming up. Ange and Jason agreed. I noticed the pitch was a bugger to get out of, so when I was up I shouted down and waited for Angela to come up, so I could help her if needed. It took her a long time to come up, but she ded need help to get out, so it was good I had waited. By then I was a bit cold so I went up the second pitch, saying I would be back when Jason was due, in case he needed help too.

I After some 10 minutes I came down the pitch again. There was no sign of Jason yet. I went back up. And then down again. Still no sign! Was somethign wrong? I noticed the rope wasn't loaded. He wasn't even on it! Was there a problem? I decided to go and hava a look. I went to a point where I could see him. We couldn't hear what the other was saying, but he sounded like there was no problem. I went up the ridge and shouted "rope free". Then I could feel the rope being loaded! Which left me on a ledge without a rope, but I knew we had yet another loose piece. I asked Ange if she could get it to me, but rather soon I got bored, and just free-climbed out. This was actually a lot easier than coming up the rope! I went up the second pitch again just for the heck of it. Then I went back. Jason was in sight! Ange went up while I waited for Jason, who then also free-climbed the last bit.

It turned out he hadn't heard Angela's feeble "rope free", and thought she was in trouble at the top of the pitch. He didn't want to risk making things worse! But he was out now. We went back up the next pitch. From there we just went straight out and back to the cars. The other entrance would have to wait for another day! We had squandered a lot of time. But I really wanted to one day see the other side of the collapse. Not today, though. Enough for a day. I had seen enough of this mine now!
Posted by Margot at 08:20