Sampling before the move

Edinburgh is very far away, but I have to go there often. It's where our cores are stored, and where the BGS keep its geophysical data. I beat a path to the door of the offices (and storage) in southern Edinburgh. But things will change! The next time I go there they'll have moved to elsewhere in Edinburgh. And Tom, the Transect Leader of "my" 2015 transects, had asked if I could come up before that all happened. We all know about moving house; it's a pain and you can't get to what you want! And that will probably happen to our cores too. The timing was awful; I was drowning in marking, I was still in the middle of processing the 2015 data in order to decide what I wanted to do with which part of which core, and on top of that I had a birthday to organise, a car to scrap and a new one to buy and sort out. But well, let's get some more on my plate.

We in Bangor (that's me, James, Catriona, and then one additional PhD student and two MSc students) were done with quite some core sections, so I could take them back. That meant going by car; my guess was that they weighed over 200kg and that's not something you bring by train. So I got me a car, loaded up on a Friday, went off on a Christmas party, and entered the weekend. On the Sunday I was in the office all day, vainly trying to finish the marking before I left, and then I took the car home. Ready to leave early on Monday!

After an uneventful trip I got there, and met Tom. He had already brought out some core sections. There was one core he had fallen in love with;  he had even had it CT scanned. No puny 2D X-rays; no, full 3D! Amazing! We got some nice shells and gastropods out of that one. We then took some slab samples out of another core. If you don't have X-ray data or something of that kind you have to just sample blind. And then the day was pretty much over. Tom had to see to his family and I went to check into my hotel. I later went for sushi. 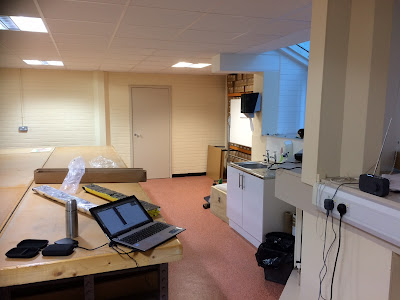 Settled in the lab with radio, coffee and laptop 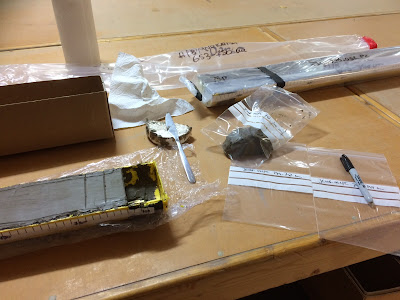 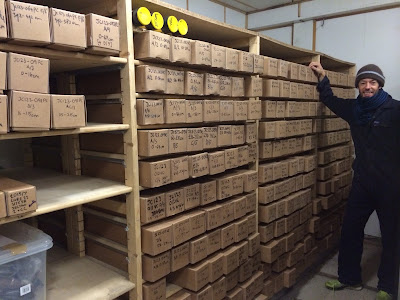 A proud and warmly dressed Tom in the cold store

The next day I got up ealry to go buy some lunch. It  would be a long woring day! And the hotel didn't serve breakfast until 8, but the nearby shop opened at 7:30, so I did that first. I also bought some kitchen towel for in the lab. And after breakfast I came in. I made myself comfortable; I had brought my inseparable radio, and a flask of coffee, and my laptop to guide me through which core was which. It's a large, empty, cold space with only a very inconspicuous window, but I was quite alright that way.

I had a list of cores from 2015 Tom wanted sampled, and I had a small additional list of my own of some last 2014 cores. So I got started! Tom had clearly chosen more cores than I could feasibly do, so I just went with those that wouldn't be likely to yield anything in X-raying so would have to be slab-sampled anyway, and the most important other ones. And I tried to fit in all the 2014 ones. I needed to get one of the people who had been on our crtuises to help me get to some of these; the core store has these nicely efficient movable cupboards that are supposed to have an engine to move them around, but these didn't, so it took quite some muscle power to get the heavy things going. By the end of the day I had done most of the 2015 cores, and all the 2014 ones bar one which I couldn't find. And just scrolling around doesn't work very well if you need two people to shift the cupboards. Oh well. I went to the hotel, and later on to a nearby pub for a meal.

The next morning I checked out and got back to BGS. I saw Graham, the logistic chief, scamper around with heavily laden trollies, moving the BGS fossil collection. He said he know off by heart where my last core was! Excellent. We shifted the cupboards and I could sort that one out too. Then Tom appeared.

We decided I had done enough; if he was extra keen on some extra cores he could come in and sample them himself; he only lives 10 minutes away from where the BGS is now. It will be further away after the move, but nothing like the 300 miles it is for me. I now had enough mud to keep me busy for a long time! So we unloaded the car (finally), put the cores back in the storage, and said goodbye. I was home at 6PM. Time to unpack, cook, eat, and go to bed early; the next day I was teaching from 9AM on, and before that I had to sort out the samples and bring the rental car back! No rest for the wicked...
Posted by Margot at 09:32