I had hoped that the week before, I would scoot off to Rhyl with David after work, have a look at a car, buy it, have a celebratory dinner in a local pub and go home. It didn't work out like that! The car had been sold. Instead of sorting this annoying car business out, and getting a dinner with a friend on top of that, I stayed in the office. Not quite as much fun! But things would look up. There was another car for sale, in Rhyl too, and we ended up going to have a look at in on Monday. This time it happened! And it got even better; that very day we got an email from a colleague, saying he had vouchers for free dinner in Colwyn Bay (which is between Bangor and Rhyl), but couldn't use them himself. Any takers? Well, yes!

We drove up in my car and sa the Citroen which was the object of our interest already parked up. The chap who sold it was friendly and showed us all the ins and outs. And when I say "us" I mean "David"; I just want to know if the obvious things (doors, lights, boot) seem to do what they should and I don't know much about anything else. David immediately starts prodding the engine, inspecting all liquids, listening to the exhaust like a heart surgeon etc etc. It was a bit like I was the Miss World judge while he was the medic doing health checks for potential astronauts. He judged the thing was sound. We went for a little ride and it still seemed fine. I decided to got for it! 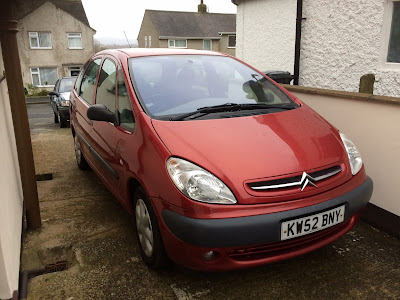 We went inside to sort the paperwork out. Sorted! We could even take it home. David's insurance allows him to drive any car. So he jumped into this one while I jumped into the little old rusty thing and off we went. We struggled a bit finding out way out of Rhyl via a petrol station, but we got there. Off to the restaurant for our free meal! It was busy but it was a nice place with good food. A nice addition to a successful mission!

I am a bit shocked I now have a car that gives me information only via digital displays; it's both a bit more modern and grown-up than I am used to, and, more importantly, if something goes wrong with the digital stuff I'll be screwed. Having this car fixed would probably be as expensive as having the old one welded. But what I'm very happy with is that this one is a lot safer. Its breaks are stronger, its lights work, and it probably is less damp so the windscreen would be more translucent. And it has ABS! Taking pride in keeping an old car going is one thing, but becoming a menace on the road is another. And this car is bigger, which is good, because we've started to make a habit of fitting 4 people + kit in our cars on Thursdays! That'll be easier in this beast!
Posted by Margot at 09:40

Congrats! Does this mean we don't have to meet in anonymous remote villages around sunset anymore, and can park conveniantly next to the restaurant/pub/your house the next Zomphop?

I'm too much of a bone-dry scientist to not remark the meeting at a shady parking lot had nothing to do with the car! I think I should make sure I'm not responsible for that fieldwork next year! But yes would be nice if you can come over for a coffee at my glamourous place. Where there is less visitor parking space now I have a big grown-up person's car! :p