In October one of the underground men, Phil, invited me to go indoor climbing. It sounded spiffing! I like active things. I like climbing, actually, but it's been a while since I did that on a regular basis! And I like nice people. And the hall was only some 15 minutes on bike away. Sounded great! The climbing would be Monday night. But then the next Monday he wasn't going. The Monday after I was away. The Monday after he was working late. Etc etc. So by the time it was December I had pretty much given up on the whole idea. Until I saw Phil at my birthday party, and he suggested climbing the next Monday! And this time, it happened! Which was great; this meant we'd go on my actual birthday and that's nice!

Phil phoned me when he was nearby, so I jumped on my bike and set off. We got there at the same time. We walked into the hall and he introduced me to his mates. Nice people! Then I changed and off we went. Phil chose a wall and we started with something simple. I raced up, and so did he. Then we moved one route sideways and tried one a little bit harder. Was the idea. I got about a meter off the floor and floundered. This one was hard! I fell out. Only then did I realise I had intended to climb the purple route but had unthinkingly climbed the pink one. That was supposed to be hard! We then did purple proper.

We also tried a route on the auto-belay machine. The kit is fine! The route was challenging. We both got stuck somewhere. That makes you wear out your arms! Mine felt like they were balloon-sized and made of some disturbing material. I got worried about what they would feel like the next day.

I wasn't sure if I would be able to do anything more with such arms, but I turned out to be pessimistic. We tried some routes on a part of the wall that wasn't just smooth and vertical but was irregular and clearly imitating natural rock. That's fun! Then there was a short mince pies interval (for Phil; I don't like them) and then we did a final burst. We tried a route we couldn't do, and then closed off the evening with a slightly easier one. It was great! I am keen to go again! And the next day my arms were fine! I think I should re-acquaint myself with my pull-up bar and raise my game... 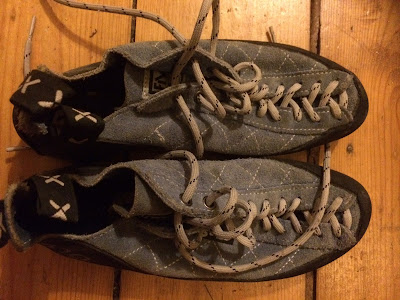