Nothing like a wet mine to celebrate your birthday in. I thought a play on the GoBelow zipwires would be a good idea! But first we had to get there. From the hut in which we would later do the party proper David, Coleen and I set off. Coleen was my running mate who couldn't make it during the evening so who was keen on entering the day programme. David was the only one of the Thursdaynighters who had been able to make it during the day. Not a big group but big enough for some fun!

Driving to Blaenau was alright. Then we had to change in the torrential rain. And then we walked up; strangely enough, we went rather fast! We did admire the torrential stream but didn't pause too much for that purpose. I was already soaking through when we got to the entrance. This was wetter than I had ever seen. It was rather spectacular! We went in, soon finding one of the men we had brought into the Lost World only a few weeks earlier. We then tried to find our way to the zipwires via a route that had no constricted spaces but that did have nice views. It took a while! And we also stopped once to take pictures of a waterfall that wasn't normally there, and for some lunch. Coleen brought out a surprise; she had banana cake with birthday candles! So sweet! 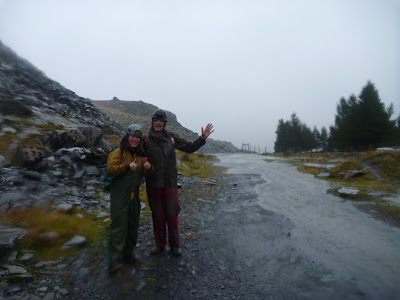 Walking up in the rain 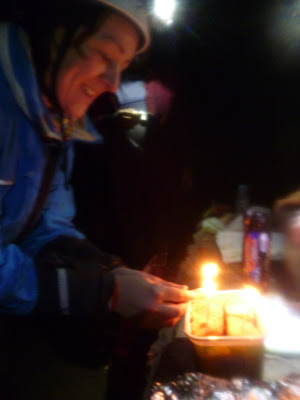 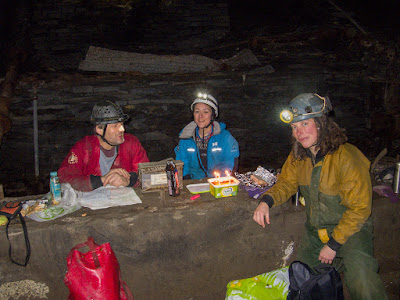 After that we went to the zipwires. And promptly bumped into a GoBelow group. They had first dibs! And there seemed to be two more around. Oh dear. We scampered around a bit to get to a free one, but it was a specimen of impressive length and impressive sag. That one looked like a bit of a bugger! If you're in the middle it's an uphill struggle in either direction. We decided to give it a miss. And we headed out. We already had to do a slight traverse to get from A to B and Coleen, who doesn't like heights, figured that was bad enough. And I thought we might have time for a cuppa if we left early! 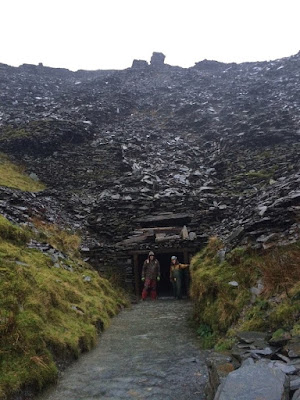 Coming out onto the path-turned-stream

We got back out. It was still raining. We walked out, past the lake, back to the stream. This was now flowing over the road, and over the bridge. Oh dear. I'd seen the stream swollen, but never like this! I was getting worried again about the roads flooding and me drowning my car. It was a bit of a deja-vu! We walked down, changed again in the rain, and drove off. The landscape was now a lakescape. And indeed, the rivers were encroaching onto the road. Oh dear! I did the first puddle with two wheels on the pavement. The next one I chanced. And got away with it. We were getting worried about us not getting to the hut, Coleen not getting home and the other guests not making it. But then the road rose again and we knew we would at least make it to the hut. 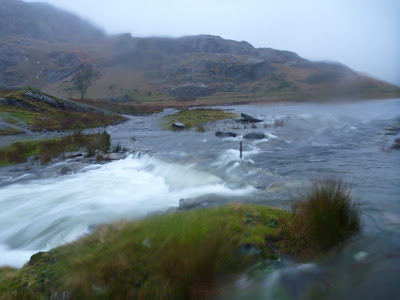 The sticky-outy thing is in the middle of the bridge, and the nearby water is supposed to be the path!

Coleen decided to make a dash for home before the flooding would get worse. David and I went in, put on dry clothes, and started the fire. Snug! I got myself a flood of tea. In spite of all the water I was thirsty. Then Jaco and Marjan arrived, with presents and decorations. It was getting festive! And then Guy and Kate appeared. Most people were there now! I started a beer. It was my birthday! Phil texted. Edwyn arrived. I was getting hungry! I knew Phil was having dinner with us so only when he was imminent did I want to start cooking. And then he arrived too. I started the cooking, but I only turned around once and David and Jaco had taken over. Very executive cooks! And it was very nice, and exactly enough. Good stuff. Then Mick appeared.

We enjoyed the dessert prepared by Jaco and Marjan. Waffles! When these were consumed Paul phoned; he had first watched a football game. His team had won, so he was in high spirits. We were complete! And retreated to the lounge for more beer and wine by the fire. But then people started to leave. Not everybody wanted to spend the night here. In the end there were only four left. And it was bedtime! 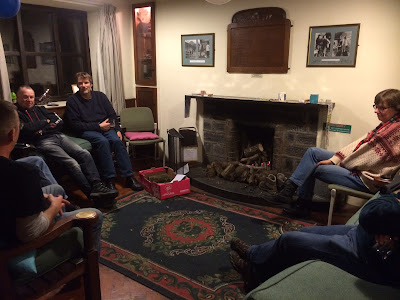 Snugness at the fire

I figured with only four people I didn't need earplugs. That was wrong! I didn't sleep very well. Oh well. We got up and David and I baked the pancakes. I had hoped the Sunday would hold a walk as the forecast was dry, but it was actually raining, so that plan went down the drain. We tidied and cleaned the hut and ferried all the stuff back to the cars. And then the men were off again! I lingered a bit; I didn't want to leave this valley yet. Although it was wet and water-logged it was very beautiful. I wanted to revel in it for a while! But after half an hour I got into my car too and went home. Even though I technically hadn't had my birthday yet it was time to go home and revert to normal! Laundry, marking, and that sort of stuff! But I had had a good weekend. Bring it on, forties! 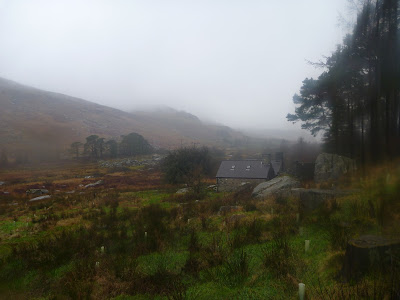